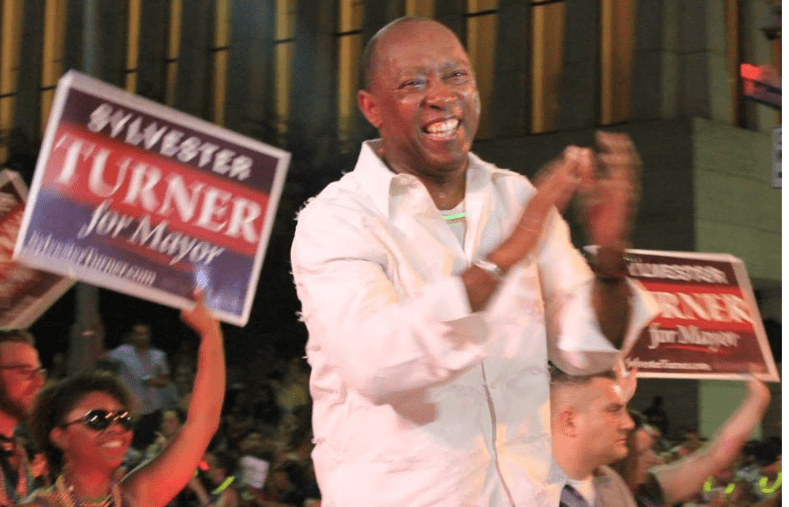 With out lesbian Houston Mayor Annise Parker term-limited, candidates to replace her are vigorously seeking the backing of the city’s main LGBT group.

One candidate, state Rep. Sylvester Turner (shown above in last month’s Pride parade), even spent $3,040 to purchase at least 76 memberships in the Houston GLBT Political Caucus to try to win the group’s endorsement.

Caucus President Maverick Welsh, however, said the campaigns’ efforts will not be enough to tip the scales.

“We know campaigns actively try to push as many people into the room as possible, and that’s why we’ve strategically tried to grow our membership over the last year and a half,” Welsh said. “I don’t think any candidate has enough members to be able to buy an endorsement.” …

“It’s kind of nice to be in the position of being the belle of the ball for once,” he said.

Project Q Houston notes that Turner’s decision to purchase memberships is particularly interesting given that he’s cast some anti-gay votes as a member of the Texas Legislature. He voted in favor of banning same-sex marriage in 2003. He also voted to ban gay foster parents in 2005:

Turner claims he’s since evolved on LGBT issues, but critics say his shift is politically motivated. Turner was dogged by gay rumors in the 1991 mayor’s race, but his spokeswoman, Sue Davis, said she doesn’t expect them to come up again:

“Twenty-three years ago, starting rumors that your opponent was gay was a time-honored political tactic,” Davis said in an email. “Times have changed. Politics is as rough as it always was – but for candidates, gay-baiting invariably backfires.”

The Houston Press detailed the gay rumors about Turner in a story in 1994 by reporter Wayne Dolcefino. Turner was apparently living with a man whom he had represented in an estate case involving another man who faked his death:

In addition to the suggestion that Turner had been involved in something crooked, the Channel 13 report, by its references to a “male model” and “hairdresser” and its film of the man Turner supposedly was sharing a house with, left viewers with another impression: that Turner might be gay. …

Dolcefino, in parts of his deposition cited by his lawyers, says that while working on the scam story he met with [private investigator Bill] Elliott in the parking lot of the Allen Park Inn, where he was shown a copy of a statement the investigator had taken from Cheryl Turner in which she professed to have recorded “graphic, sexually related phone conversations” between Turner and other men and identified “certain individuals with whom Mr. Turner was allegedly having homosexual relations….”

Regardless of the gay rumors, another candidate says Turner’s voting history demonstrates a lack of consistency on LGBT issues. Former Congressman Chris Bell voted against a federal marriage amendment in 2004 and received a 100 percent score from the Human Rights Campaign. From The Texas Observer:

“I think many Americans, if not most Americans, have evolved over the last 10 years on LGBT issues, and I include myself in that group, along with President Barack Obama, along with Hillary Clinton and so many others,” Turner said. “People evolve, and I think that’s what we want people to do.” …

“I think many of us evolved on the issue of marriage equality,” said Bell, a one-time board member for Equality Texas. “There are certain issues that weren’t marriage equality that were just basically trying to address outright discrimination, and that’s a course of a different color.”