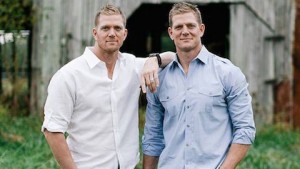 “The Supreme Court’s decision on marriage – it was the worst thing that could have happened to our nation but it was the best thing that could have ever happened to the Church. Because now we get a chance to experience real persecution and when persecution comes that’s God’s prescription to purify us. And we now as a Church are going to be able experience that purification and it will separate the weak from the chaste.”

That’s right – slavery, the subjugation of women, colonialism, the systematic oppression of people of color, war, famine, hurricanes and every other awful thing in our nation’s history pales in comparison to the horror of two men or two women being able to tie the knot.

The Benham brothers also warned that the gay “bully agenda” is really just about taking away peoples’ religious liberties and that conservative outlets like Miller’s radio program may soon be shut down.