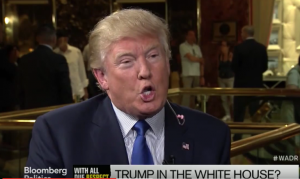 On former KKK Grand Wizard David Duke calling him “the best of the lot”:

On how he would explain his opposition to same-sex marriage to a gay child or grandchild:

On his favorite Bible verses:

On whether he’s more of an Old Testament or New Testament kind of guy:

He’s using it because I use it…Maybe he shouldn’t use it, but I am going to.

A new Quinnipiac University poll puts Trump at 28% with his closest competitor Ben Carson at 12%.

Highlights and full interview below: