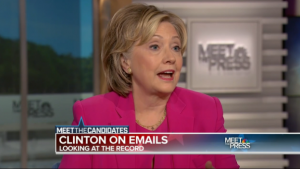 Hillary Clinton sat down with Chuck Todd on Meet the Press for a wide-ranging interview on her ongoing email controversy, her record on gay rights, poll numbers, and Benghazi.

On having her State Department email account at her home’s private email server:

It was already there. It had been there for years. It is the system that my husband’s personal office used when he got out of the White House. And so it was sitting there in the basement, it was not any trouble at all. I know there are a lot of people who are questioning that but the fact is that it was there. I added my account to it, it apparently took a little time to do that and so there was about a month where I didn’t have everything already on the server. And we went back and tried to recover whatever we could recover. And I think it’s also fair to say there are some things of this I just can’t control. I can’t control the technical aspects of it. I’m not by any means a technical expert. I relied on people who were and we have done everything we could.

On “evolving” on gay marriage:

“On same-sex marriage, like a lot of people, including our president, I did evolve.  And I was not raised to even imagine this.  And I’m thrilled now that it is the law of the land.  And I have a lot of good friends who are now able to be married because of the changes we’ve made legally and constitutionally.”

Todd also shared his thoughts on the interview during a follow-up appearance on MSNBC.