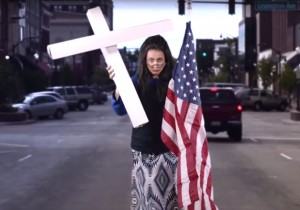 The popular song from the comic opera The Pirates of Penzance has been adapted for other comedic endeavors (e.g. Aaron Sorkin, writing for Studio 60 on The Sunset Strip).

This latest version highlights all of Kim Davis’ hypocrisy and lunacy by switching out the original Gilbert and Sullivan lyrics for ones that explain just how Kim is the very model of the modern fundamentalist:

I’m not merely judgmental, I’m the absolute judgmentalest! I always follow scripture and I act on God’s authority, Though marital fidelity was never my priority.

I married first one husband, then two others, then another one. Because I think one man is pretty much like any other one. I’ve never been too troubled by the dubious legalities. Of sex outside of marriage or of other trivialities.

But when it comes to icky stuff like homosexuality, I’m always very strident with my Puritan morality. In short in matters biblical and spiritual and Calvinist, I am the very model of a modern fundamentalist.