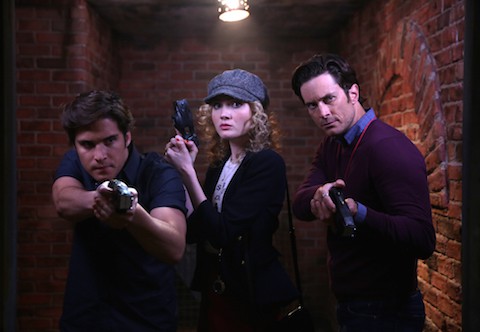 It’s clear Ryan Murphy and his co-creators love Halloween. A two-part Halloween episode has become a highlight of his American Horror Story, so it should come as no surprise that he’d want to continue the tradition on Scream Queens. Here though he’s opted for a three-parter, which feels a little excessive, even by his standards.

It appears as if he’s waiting for the final installment in Scream Queens’ Halloween trilogy for the big bang, leaving this second act to feel a little slower. On the other hand, by reducing the show’s typical warp speed, this episode felt like it gave the characters a bit more room to breathe. Unfortunately, too much of that time was spent with Abigail Breslin’s character, who, to be honest, makes me wish the Red Devil would put me out of my own misery when I have to suffer through her extended scenes.

A few key clues were dropped, and the big reveal late in the episode cemented a major plot point that’s had folks speculating since the premiere. Let’s talk about it in the recap below. 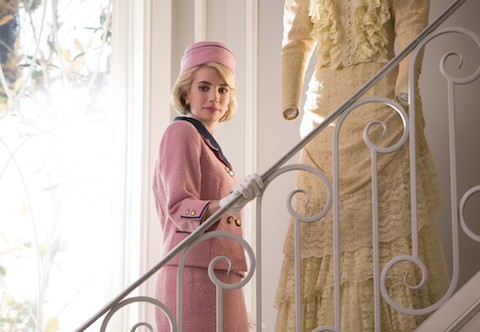 For someone who deal so much in Machiavellian tactics and cutthroat manipulation, you’d think Chanel No. 1 (Emma Roberts) could spot her tiny empire crumbling all around her. Instead of keeping her subordinates seemingly happy serving her, she’s been pushing them ever closer to the edge with her abuse.

That’s particularly true for Chanel No. 5 (Abigail Breslin). Let’s face it, Five was always a little tightly wound, but she’s just about at her breaking point. When Chanel Prime reveals their costume theme this year will be wives of assassinated Presidents and Five will be none other than Mary Todd Lincoln, it’s the final straw.

Of course, Chanel No. 5 has got an awful lot of dirt on Chanel No. 1, including that whole mess about murdering the old maid, Ms. Bean (Jan Hoag). That makes her a valuable asset to Hester (Lea Michele), who’s focused on her own ascent to power. Her scheme hinges on Zayday (Keke Palmer) winning the election for head of Kappa Kappa Tau, so she’ll need to rally Chanel No. 5 and the candle-obsessed new pledge Jennifer (Breezy Eslin) (the latter being an easy get once they reveal Chanel No. 1 has been wasting precious Diptyque candles). 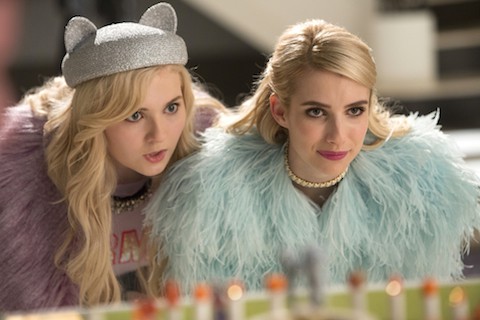 They turn Chanel No. 1 in for Ms. Bean’s murder, but since Chanel is rich, white and in America, she’s only in prison for a hot second before Chanel No. 3 (Billie Lourd) bails her out. Hester manages to pin the whole thing on Chanel 5, further fueling Chanel Prime’s vendetta against her high-strung underling.

As punishment for implicating Chanel No. 1 in a murder investigation, Chanel No. 5 must now ready the pumpkin patch Chanel No. 1 is erecting to outshine Zayday’s haunted house. She enlists the help of Roger and Dodger (Youtube’s Rhodes Brothers), the two beautiful dummies by whom she’s been getting spit-roasted as of late. (As an aside, you can have her say “spit-roasted” all you’d like, but I just can’t buy this sexually-charged, cold-blooded bad girl version of Abigail Breslin. She’ll always be the precocious girl blissfully dancing to Rick James to me.) Although the campus is on curfew, the trio set out to light all the jack-o-lanterns outside the perfect recreation of the maze from The Shining. It’s not long before the Red Devil shows up and chases the threesome into the maze. Roger and No. 5 split off from Dodger, leaving him to get his belly sliced open and left for dead. 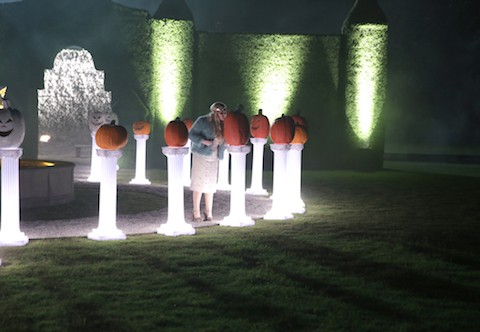 Meanwhile, Grace (Skyler Samuels) is determined to go find Zayday. She’s already got Pete (Diego Boneta) on board to go searching, but the rest of the Chanels are unmoved by her cause. Her next attempt to draft a little assistance leads her to dear old dad, Wes (Oliver Hudson). Grace and Pete bust in on Wes and Gigi (Nasim Pedrad) doing the humpty-hump, which is awkward for everyone involved. Coitus totally interuptus-ed at this point, they agree to help with the search. 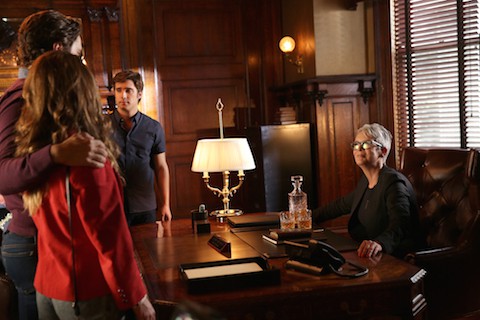 Next up is Denise Hemphill (Niecy Nash). She’s in the office of Dean Munsch (Jamie Lee Curtis) swapping stories about sleeping with Chad Radwell (Glen Powell). They both have tapped that, joining the illustrious list of also-bangs, which includes all the Chanels. Grace, Pete, Wes and Gigi show up and loop Denise into their plan to find Zayday. Conveniently, Grace knows Zayday’s password (Oakland nachos, after her favorite food), so they’re able to trace her phone via the magic of technology. Armed with an address and a bunch of Tasers, our ragtag group of super sleuths make their way into the Red Devil’s hideout. 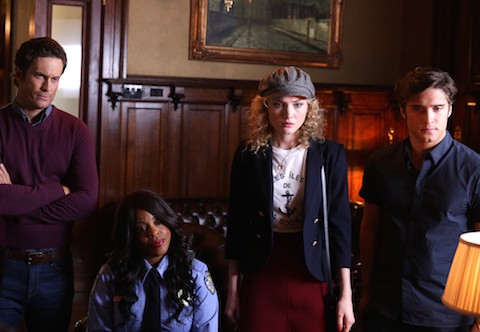 Inside, Grace, Pete and Dad find the pit Zayday was being kept in, but no Zayday. They also find a totally weird romantic dinner all laid out, complete with Oakland nachos. (Interesting!) 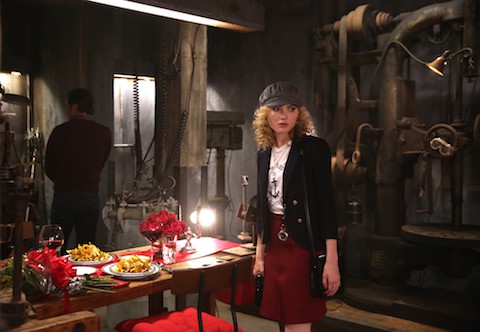 Though, while they’re surveying the spread, Denise and Gigi have found a scene out of an Eli Roth movie. A room with lots of various saws and other unpleasant tools of torture all hanging from the ceiling. Of course, that’s when the lights cut out, and Gigi manages to Tase the Red Devil before he can strike. Denise rushes out of the room, and, after leaving Gigi alone with the Red Devil for some reason, the murderer escapes. The whole group comes together in the torture room, and Wes volunteers to call the police. (Though, to be honest, I’m not sure I believe that he actually did call the police. Something felt weird there.) 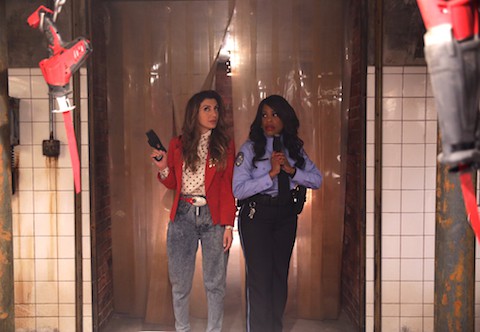 Back at the Kappa house, it’s almost time to vote when Zayday miraculously returns. She explains that the Red Devil treated her kindly, tried to wine and dine her, but, once she had her chance, she stabbed him in the hand with a fork and ran. Grace can corroborate this story based on the scene she observed. Still, this all feels really fishy. 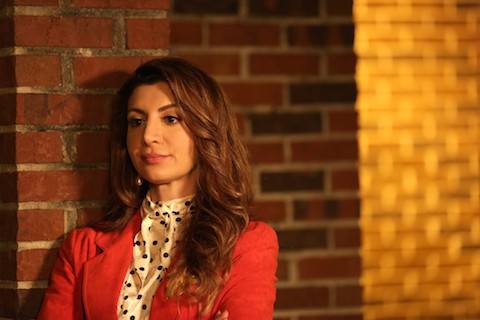 Finally, we cut to Gigi walking alone late at night through campus. Behind her, the Red Devil is stalking. They duck around a corner, and Gigi tells him he’s late and they’ve got to get rid of “him.” Ooooooh, who can it be?

If I had to guess, I’d say that she was talking to Zayday. That’s right, I think I’m with Denise on this one. Making Denise end up being a surprisingly clever and capable detective is just the kind of thing Ryan Murphy would do. Does that mean that Zayday is the bathtub baby? Maybe! Just because the baby’s mother was white doesn’t mean she is too. Plus, something strikes me about Zayday’s name. It’s almost too unique. It also sounds an awful lot like a pig latin version of Daisy. It may be a wild guess, but I bet there’s a figure from that 1995 scene with the name Daisy somewhere. It would make sense for Gigi and that bathtub baby to be working in cahoots to exact their revenge on the sorority/college that covered up her mother’s death. We were told Zayday was raised by her grandmother, so who knows what happened to her mom, really.

But what about who Gigi was adding to the Red Devil’s hit list? She could be referring to Boone (Nick Jonas) getting a little sloppy in the lair.  I feel pretty confident that Gigi was referring to killing one of her co-conspirators (HASHTAG CAHOOTS!), if only because none of the other male characters seem like an actual competent threat to discover what they’re up to.

What did you think of the episode? Who do you think Gigi was talking to at the end?