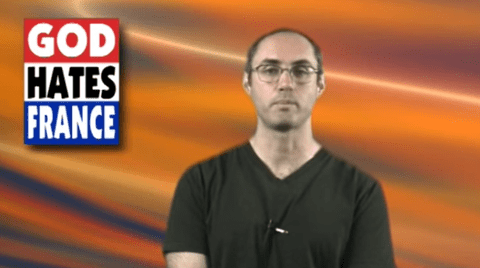 Tweeting on Saturday, the virulently anti-gay WBC tweeted, “So long as you have fag marriage and abortion, terror reigns!” The group also said that terror would end when France stops “marrying fags”, calling on the citizens of France to “repent and mourn for fag marriage.” They went even further, suggesting that the horrific acts of terror on display in the French capital on Friday are “child’s play compared to what God has prepared for fag marriage.”

In a YouTube video, WBC insisted that the Paris Attacks were the will of God. Fred Phelps Sr.’s grandson Benjamin Phelps said, “These things happen by [Jesus’s] command.” He added, “ISIS is nothing more than a tool in the hand of God used to punish a wicked nation. France is one of the most evil countries on earth. They aggressively push for fags and fag marriage and just as aggressively push for anyone who would preach against fags…They’ve made it a crime to preach against fags in their country.”

Phelps also addressed a tweet sent out by Stephen King that compared WBC to ISIS.

Hating all Muslims for what happened in Paris is like hating all Christians because of the gay-hating Westboro Baptist Church.

Said Phelps, “WBC doesn’t go around murdering people or advocating the murder of people…our weapon is the word of God.”