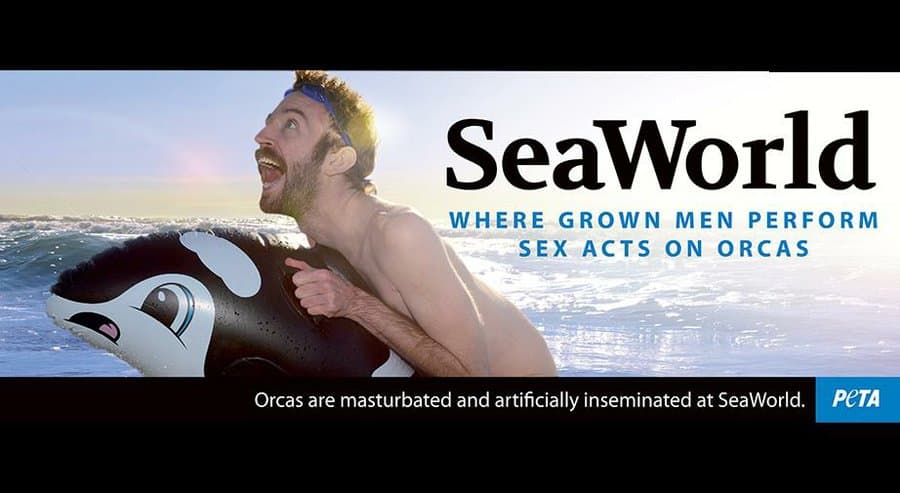 PETA has unveiled its latest ad campaign targeting San Diego’s SeaWorld and the content has some unsettled.

The ad (pictured above) depicts an at least partially naked man presumably making his “O” face while riding an inflatable pool toy resembling an Orca (who, it should be noted, looks understandably traumatized). The copy for the ad reads, “SeaWorld: Where grown men perform sex acts on orcas.” A smaller caption on the ad says, “Orcas are masturbated and artificially inseminated at SeaWorld.”

PETA says it is eager to get its latest ad on a billboard in San Diego.

“If people get a real understanding of what SeaWorld is doing, that their business model relies on sexually assaulting male orcas and forcibly impregnating unwilling females, that’s what they are going to find off-putting, not the billboard,” said Ashley Byrne, a campaign specialist with PETA. “I don’t think there’s a nice way to talk about that.”

She acknowledged that three major outdoor advertising companies have already turned down PETA’s request for billboard space, based on the artwork, but the organization is not willing to give up yet.

SeaWorld San Diego spokesman Dave Koontz said Wednesday, “We have no desire to respond to something like this.”

PETA is unlikely to find a billboard company willing to display the ad given its content. They may resort to using a mobile billboard truck to get their message out. Said PETA’s Ashley Byrne, “One way or another, we do plan to run this ad in San Diego.”