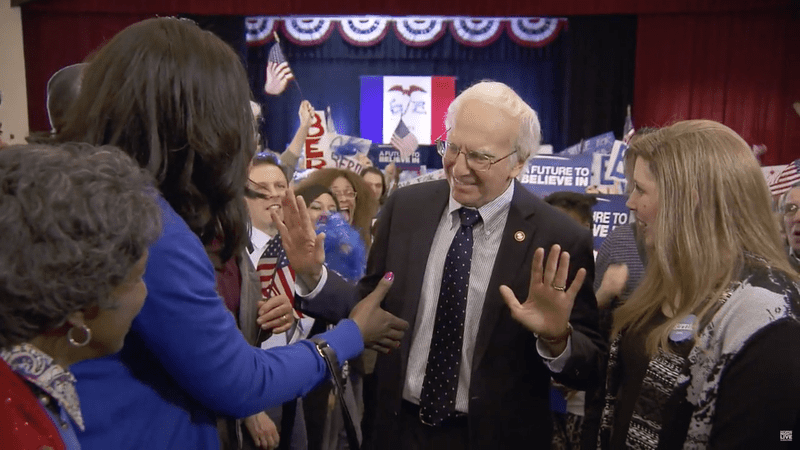 On Saturday Night Live this week, guest host Larry David brought back his pitch perfect portrayal of Democratic presidential hopeful Bernie Sanders in a sketch that combined both his and Sanders’ personalities in a comedically perfect way.

David’s “Bern Your Enthusiasm” blended some of what we know about Sanders’ political journey thus far–for instance, that he’s having trouble getting support among Black voters, and that he lost the Iowa caucuses by a razor thin margin–with David’s own brand of snark.

In this re-telling of the 24 hours leading up to the Iowa caucuses, Bernie makes a series of fateful choices that end up influencing the election results.

Find out how Sanders could have lost by 0.2% (or roughly 5 votes according to David’s math), below.

Bernie Sanders the candidate did show up on SNL to make a cameo, as promised, though not in the cold open, David’s monologue or the actual sketch about him. Instead, Sanders took part in a bit about an ocean liner in distress that needs to evacuate its passengers into lifeboats.

Sanders’ character, Bernie Sanderswitzky, rails against Larry David’s character when he tries to get preferential treatment because he’s rich. “I’m so sick of the 1 percent getting this preferential treatment,” Sanders says, alluding to one of his central campaign messages. David says that all sounds like socialism. Sanders corrects David, and replies, “Democratic socialism.”

In the bit, Sanders’ character also made light of his Jewish heritage, joking that he’d change his last name, Sanderswitzky, when he gets to America, “so it doesn’t sound so Jewish.”

Watch that sketch, below.