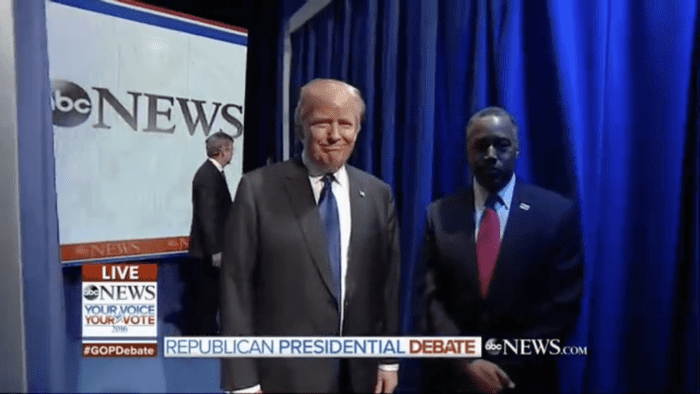 Saturday night’s GOP debate in New Hampshire began with what can best be described as an awkward and hilarious train wreck.

Before any of the candidates could even utter an opening statement or thank the voters of New Hampshire, Ben Carson became confused about when he was supposed to take the debate stage, lingering in the wings and almost going on when Ted Cruz’s name was called. He kept waiting to be called and ended up causing a pile-up of candidates. Thankfully, all of this was caught on camera.

The trouble began during the candidate introductions to Saturday night’s ABC News debate. As Gov. Chris Christie walked out on stage, moderators David Muir and Martha Raddatz called out Dr. Ben Carson. A camera backstage showed Carson starting to walk out, but he stopped himself once he heard the moderators announce the next candidate, Ted Cruz.

Cruz walked out, and Carson stayed put as a stage manager tried to wave Carson on stage. He didn’t move. Donald Trump then walked up next to Carson as his name was called, but also stopped next to Carson.

Marco Rubio was called up next, walking past both Trump and Carson onto the stage, as did Jeb Bush. John Kasich initially didn’t make it out onto the stage at all.

The moderators then said, “Ladies and gentlemen, the Republican candidates.” Except they were missing Carson, Trump and Kasich. So Radditz piped in, “Dr. Ben Carson, please come out on the stage. He’s standing there, as well. Dr. Carson.” Carson finally meandered on stage. Trump still waited. “And Donald Trump.” But Trump would not come out on stage, and the nightmare would not end. So they tried again: “And lastly, we welcome back to the debate stage Donald Trump.”

The awkwardness must be seen to be believed.