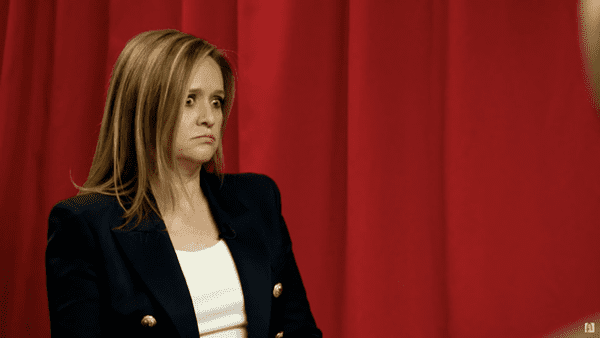 A few weeks ago Samantha Bee sat down with some Trump supporters and forced herself to listen to them. There had to be more to his supporters than meets the eye, she reasoned. They can’t all be racist thugs…right?

Said Bee of the group, “They were college-educated, bipartisan, multiethnic, and look! No one was even escorting the gay black guy out!” While the conversation started off amiably enough, things went off the rails when the group got to talking about Trump’s proposed ban on all Muslims entering the United States.

Then there was a conversation about the “media’s agenda.” Which basically made Bee feel like this.

Bee asked the group, “So you like his media whoredom?” Which led one bro in the audience to argue, “But you’re whoring off of his media whoring.” He added, “I think you’re kind of a trickle-down media whore, because here you are, just getting the remains.”

(Side note: trickle-down media whore has to be the most Republican phrase ever uttered.)

The man replied, “I feel that’s an accurate assessment.”

From there, Bee decided it was time to treat the Trump supporters to the party that was their condition for talking to her in the first place. But Bee couldn’t give up on trying to understand these strange political animals.

Watch as Bee’s patience is tried, below.

Previous Post: « This Madonna Tribute Video Features Over 200 Vogueing Volunteers – WATCH
Next Post: Hate Group Mouthpiece Tony Perkins Has Been Elected as a Delegate to the GOP Convention »