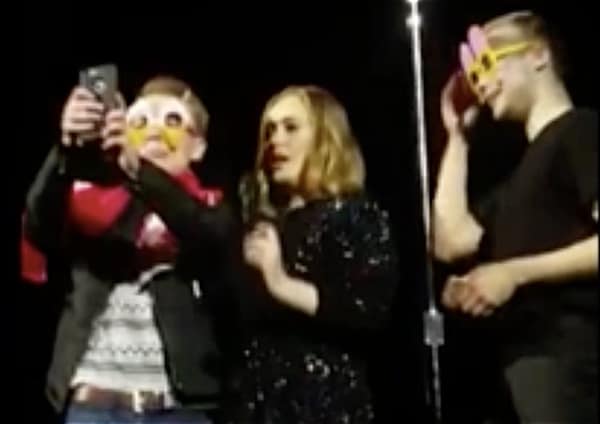 Adele invited two fans up on stage at her concert in Copenhagen, Denmark last night, who then proceeded to get engaged, surprising the singer, who jumped up and down with joy. She then made them an offer they probably wouldn’t refuse.

In front of the sold-out crowd of 10,000 fans, she said: “Should I be your surrogate if you have children? I’d love to have a baby with someone Swedish.”

Discussing his impromptu proposal on stage, Andre told Danish TV station TV2: “It came as a big surprise that we were up on stage. I made the decision on the spur of the moment – I felt the love! Everyone cheered, it was crazy. I have never heard so much noise!

“I felt like a rock star, and I might think I’m deaf now. But it was the best concert ever.”

Andre also praised Adele for being such a “beautiful” person and for giving him the opportunity to make an unforgettable marriage proposal.

Better quality video is here. There doesn’t seem to be a clip of the additional surrogacy statement but send a link if you find it.