RIP. Morley Safer of 60 Minutes has passed away at 84, only one week after retiring: “The Toronto native was the longest-serving correspondent of the venerable news program, having joined in 1970 and becoming part a formidable team — with Mike Wallace, Harry Reasoner, Ed Bradley, Dan Rather and Andy Rooney — that uncovered corruption, confronted public and corporate officials, and set the standard for broadcast magazine journalism.”

OKLAHOMA. State legislature passes bill making it a felony to perform abortions: “This sweeping measure, which opponents described as unconstitutional and unprecedented, now heads to Gov. Mary Fallin (R). She will have five days — not including Sunday — to decide whether to sign the bill, veto it or allow it to become law without her signature, according to a spokesman. […] The Oklahoma bill is the first such measure of its kind, according to the Center for Reproductive Rights, which says that other states seeking to ban abortion have simply banned the procedure rather than attaching penalties like this.”

ZAC EFRON. Shows off his hard body in a wetsuit.

MOVIES. Daniel Craig wants nothing to do with James Bond anymore, passes on $100 million for two more movies.

#FREEKESHA. Kesha’s performance at the Billboard Awards will go forward after Dr. Luke and Sony first blocked the singer from taking the stage at the award show. 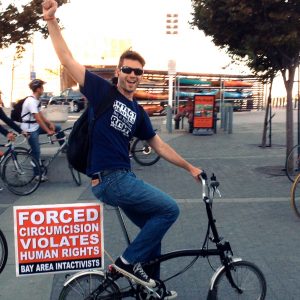 SAN FRANCISCO. Prominent Intactivist Jonathon Conte has committed suicide: “For those who knew him personally, he was a bright and friendly person. But on the inside, he was tormented by many things, and circumcision was near or at the top of this list of grievances.”

HILLARY ON TRUMP. Does Hills think Donald Trump is qualified to be President of the United States? “No, I do not. And I think in this past week, whether it’s attacking Great Britain; praising the leader of North Korea, a despotic dictator who has nuclear weapons; whether it is saying “pull out of NATO” or “let other countries have nuclear weapons”—the kinds of positions he is stating, and the consequences of those positions, and even the consequences of his statements, are not just offensive to people; they are potentially dangerous.”

ARKANSAS. Lawmaker wants to make using the “wrong” bathroom a sex crime: “Because the issue is not on the agenda for the special session that begins today, the amendment would require two-thirds support to be considered.”

SOCIAL MEDIA. Colton Haynes posts this in honor of #NationalSendANudeDay.

BROADWAY. Kristin Chenoweth reveals who she thinks should play Galinda and Elphaba in a movie adaptation of Wicked.

EGYPTAIR. Terrorism seems the probable cause behind the downing of Flight 804: “The aviation minister’s quick acknowledgment that terrorism might be a cause this time was in stark contrast to the government’s handling of the loss of the Russian airliner.”