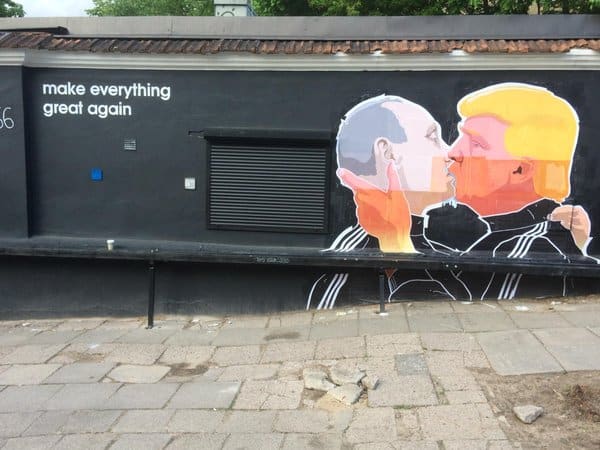 Artist Mindaugas Bonanu depicted the two locking lips in the artwork featured on the side of a barbecue restaurant in Vilnius, the capital of Lithuania. Next to the painting is the phrase “Make everything great again,” a play on Trump’s campaign slogan, “Make America Great Again.”

Restaurant owner Dominykas Čečkauskas said the provocative painting is “predicting that if Russia and the USA would ever make out, it would happen in the Baltic states … with tongues or with tanks.” […]

Čečkauskas said the art will remain on the wall of his restaurant for the next several months and that passersby have reacted positively. Many people have taken selfies with it in the background or have staged a similar smooch in front of the image.

The painting hearkens back to the famous 1979 “Socialist Fraternal Kiss” between Russian secretary Leonid Brezhnev and German politician Erich Honecker [seen below in a mural on the Berlin wall]. A kiss on the mouth between Socialist leaders was not unusual then, but a photo capturing Brezhnev’s and Honecker’s enthusiastic kiss and embrace circulated around the world. 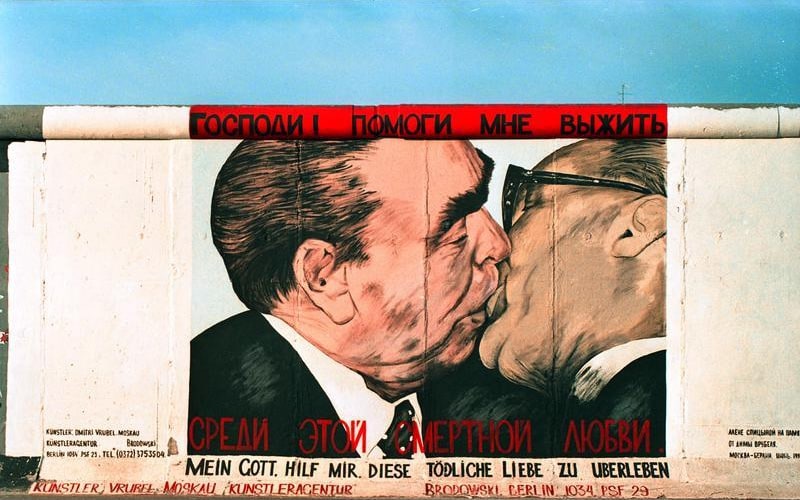 The mural of Putin and Trump makes light of praiseworthy comments each has made about the other. In December of last year, Putin called Trump “a very bright and talented man.” Trump reciprocated the warm words by calling a Putin an actual “leader” (as opposed to Barack Obama).

Watch a news report on the mural, below.