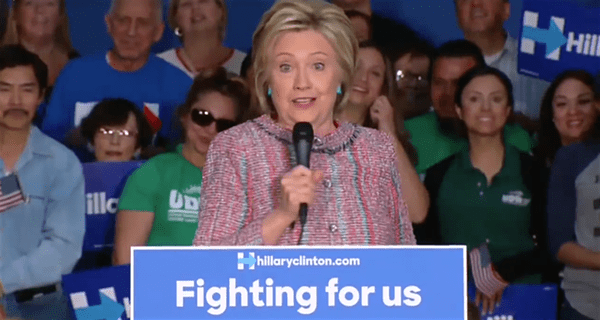 Hillary Clinton was distracted by two shirtless men during her rally in Buena Park, California on Wednesday. The individuals are apparently pranksters who have trolled both Clinton and Donald Trump in the past.

The candidate was speaking in Orange County when the two men were about to be ejected because they weren’t wearing shirts. They shouted at Clinton and asked to stay. Clinton responded, “Well, um, you know what, as long as they don’t take anything else off.”

Later in the rally Clinton said she was distracted by the guys, as Politico notes:

The OC Register talked with the shirtless men:

Front and center at the rally, and shirtless not long into it, friends John Nelson, 32, and Dan Stifler, 32, of Florida and Colorado, respectively, called Clinton “the perfect candidate.”

While taking several photos with rally goers as the Union hall emptied Stifler said he and Nelson have attended the gatherings of other candidates. Everything in Clinton’s message “makes sense,” he added. “It seems relatable.”

Reporter Natalie Andrews noted the connection between this most recent stunt and past incidents carried out by two individuals who appear to be Nelson and Stifler…names which could also be totally fake.

UPDATE. The names attributed to the pranksters are at least partially accurate. The individual identified by the OC Register as Dan Stifler is apparently Davram Stiefler.