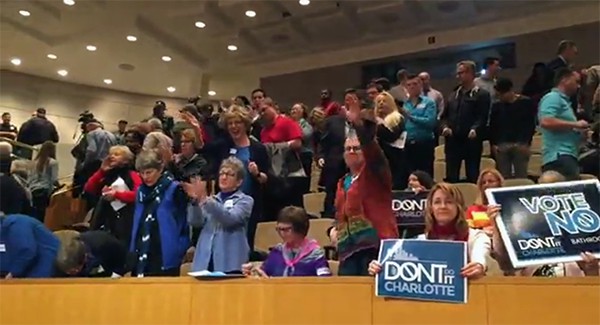 Minutes before a meeting where Charlotte lawmakers were scheduled to possibly vote to repeal the city’s own nondiscrimination ordinance, the City Council released a statement announcing that the vote would no longer be on the agenda: “The Mayor and City Council will continue to work with the General Assembly and with business and community leaders to address the continuing negative impacts of HB2 on the City of Charlotte and North Carolina. Charlotte remains committed to being a welcoming and inclusive community that is free of discrimination.”

Charlotte remains committed to being a welcoming and inclusive community that is free of discrimination.

Mecklenburg LGBT Political Action Committee (MeckPAC), a Charlotte-based nonprofit, confirmed on Facebook that “due to lack of consensus and not enough votes among the Charlotte City Council to repeal or modify the Charlotte Non-Discrimination Ordinance, Mayor Jennifer Roberts has pulled the issue from the City Council meeting agenda. Thank you to all who contacted the city council members–our voices have been heard!”

The vote would’ve been largely symbolic, since HB2 already nullified almost all of it, but it could have been the “first step toward a compromise with Raleigh,” as The Charlotte Observer reported. David Badash, founder of The New Civil Rights Movement agrees: “it would have given the state government cover for continuing to enforce HB2, which has been deemed both illegal and unconstitutional by legal experts,” he wrote.

The city’s nondiscrimination ordinance, which extended protections to Charlotte’s gay, lesbian and transgender people, passed on a 7-to-4 vote last February and angered the religious Right and conservative legislators. They vowed to take the fight to North Carolina’s General Assembly and in March, the state legislature passed HB 2, a “sweeping anti-LGBTQ bill that not only repealed Charlotte’s ordinance, but banned future local laws that protect LGBTQ people. And on the exact same day, the governor signed the bill into law.”

The national bathroom hysteria had begun. 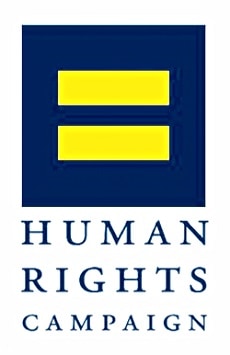 On a series of recent tweets leading up to tonight’s vote, the Human Rights Campaign (HRC) fought hard to convince legislators to vote not to repeal the ordinance, and urged Charlotte city leaders “to stand up to bullies in Raleigh. Stay strong for LGBT people,” and to be on the “right side of history.” On Sunday the gay rights group clarified that it was referring to the Charlotte Chamber as “anti-LGBT bully” as well, and not just the leaders in Raleigh. In a statement released this morning, it explained why: “For weeks, the North Carolina Chamber of Commerce and Republican legislative leaders in Raleigh have refused any efforts to repeal HB2, and have instead been pressuring Charlotte City Council members into making deals that potentially involve rolling back the city’s local protections.”

Charlotte Chamber president Bob Morgan complained about HRC’s assertions and said he took “great offense at the suggestion that we support discrimination of any sort,” he said in a statement.

Charlotte resident Michael Leary believes that with today’s symbolic vote, the Chamber and some legislators were “trying to erode parts of those measures. It’s disappointing there are potential members of the city council who are willing to pull the rug out from under these anti-discrimination measures. Civil rights are not negotiable.”

It’s unclear if Charlotte’s city council will revisit the vote in a future session, but for now it’s a small victory for LGBT rights.