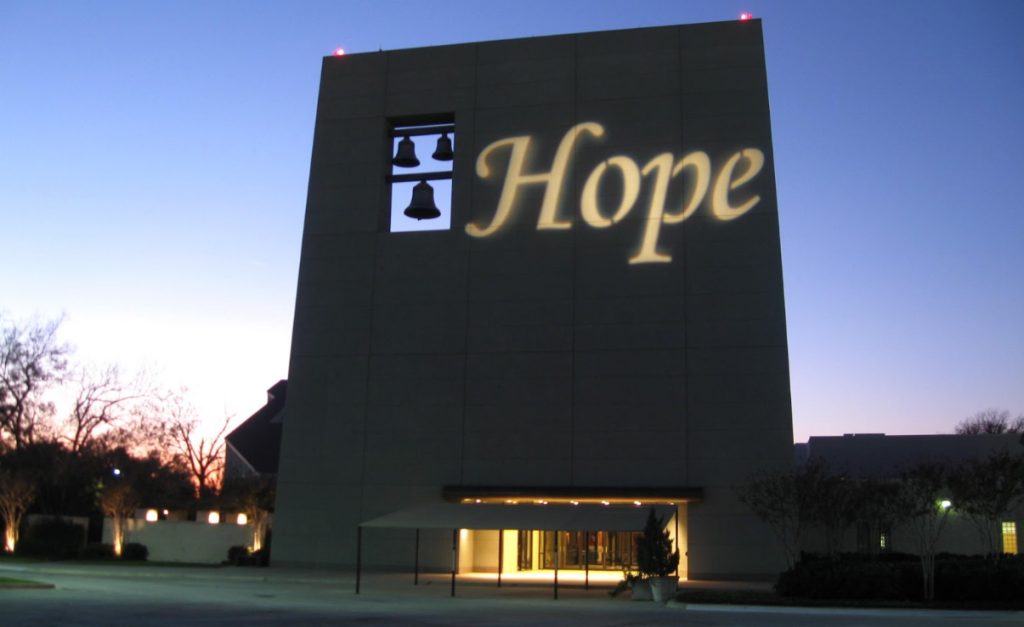 Dallas’ Cathedral of Hope, a predominantly LGBT congregation that is often referred to as the world’s largest gay church, was evacuated early Sunday in response to a bomb threat.

The church was evacuated at about 8:05 a.m. local time after suspicious packages — a suitcase and two carry-on bags — were found on the property, The Dallas Morning News reports.

Services titled “Be Anxious for Nothing” were scheduled for 9 a.m. and 11 a.m. Sunday, one week after the terror attack that left 49 people dead at a gay Orlando nightclub.

As a bomb squad investigated, the church went forward with the services outside, with congregants gathered under trees.

“This will not deter us from worship this morning and we will continue to not walk in fear or allow instances of hate to overcome the promise to love,” the church wrote on its Facebook page.

UPDATE: The packages have been deemed harmless:

The packages have been deemed harmless, and we are headed back inside just in time for the 11am service! A special thanks goes out to our Dallas Police Department and law enforcement that have done everything to ensure the safety of our community and church family.

More from the Dallas Police Department:

On June 19, 2016, shortly after 8:00 a.m., Dallas officers responded to a suspicious package call at the Cathedral of Hope located at 5910 Cedar Springs Road.  When officers arrived, they were informed that a security personnel, employed by the church, was making his rounds of the outer perimeter when he came across what he believed to be a suspicious package.  The package was located near an adjoining construction site on the east side of the church.  The church was in service at the time and a decision was made to evacuate the parishioners as a precaution.

Officers cordoned off the area and notified the Explosive Ordinance Unit (EOD).  Once EOD arrived, they were able to determine that the package did not contain any explosive material. 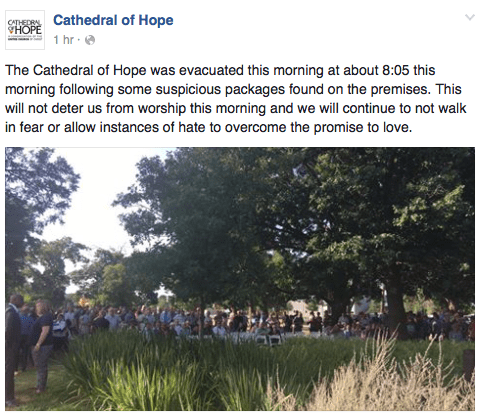 A bomb squad is on the scene at the Cathedral of Hope church after the evacuation earlier. https://t.co/Qt0crGZ1xf pic.twitter.com/8lsgHzSHfv

Cathedral of Hope: Bomb squad is on the way for suspicious packages near scaffold pic.twitter.com/4HxpVplUJ1