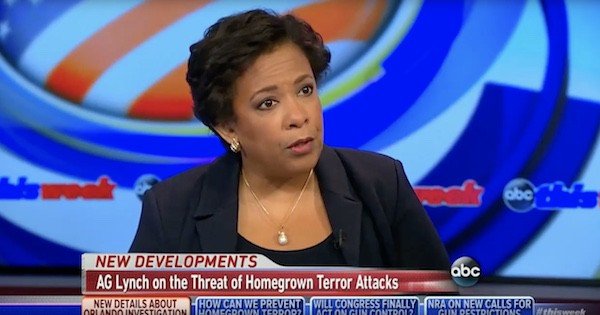 U.S. Attorney General Loretta Lynch says the government will be releasing a partial transcript of the phone conversations between the Orlando shooter Omar Mateen and hostage negotiators while Mateen was in the horrific process of taking 49 lives last weekend in the Pulse nightclub in Orlando.

Said Lynch to Jonathan Karl on ABC’s This Week:

“What we’re going to be doing also is talking more about what happened, sadly, inside the nightclub. Tomorrow, for example, we’ll be releasing a partial transcript of the calls between the killer and the hostage negotiators so people can, in fact, see the type of interaction that was had there. I say partial because we’re not going to be, for example, broadcasting his pledges of allegiance. We are trying not to revictimize those who went through that horror. But again we’re trying to get as much information about this investigation out as possible, and we want people to provide information that they have to us.”

Lynch also said she’ll be going to Orlando this week:

“I’m actually going to Orlando myself on Tuesday to meet with the team on the ground, to get an on-the-ground briefing on the investigation. We’re meeting with the victims, the first responders, talking about the way in which we’re going to be supporting the victims and the first responders. And also, operationally, you know, we will be releasing more information about this investigation as it comes to light.”

Previous Post: « The First Sporting Event in Orlando Since the Shooting Was Full of Emotion: WATCH
Next Post: Predominantly LGBT Megachurch in Dallas Evacuated Due to Bomb Threat »