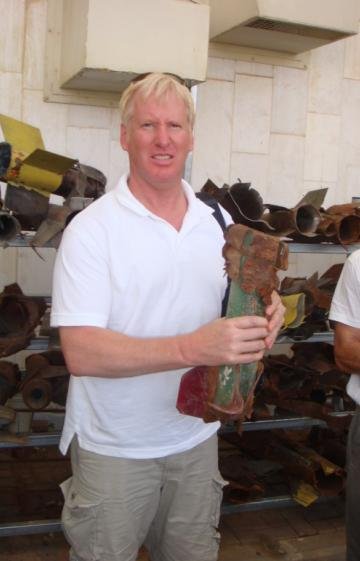 Ultra-conservative blogger Jim Hoft, a man whom progressive media watchdog Media Matters has called “the Dumbest Man on the Internet” came out of the closet Monday, a day after the Orlando massacre, and invited fellow gays to “come home” to the Republican Party and elect Donald Trump as president: “There is only one man who can lead this nation and protect all gays and all Americans. His name is Donald Trump,” he wrote. “In 2016 only one candidate will protect gays from another Islamist attack.”

Hoft is the owner of The Gateway Pundit, a prominent right-wing, anti-Obama political blog, known for committing gaffes here and there. (Hoft also proudly announced on his blog that a group called LGBT Phoenix had endorsed Donald Trump on Twitter, but the Twitter account turned out to be fake.)

True to form, he went after President Obama, saying that he had lost it:

After the deadliest Islamist attack on American soil since 9-11 Barack Obama blamed hatred and guns. His inability to called the attack what it is – Islamic jihad – has progressed from denial to psychosis. It’s never been more apparent than Sunday, when Barack was comparing the Pulse club attack to a movie theater shooting by a schizophrenic, that our poor president has lost his own grasp of reality.

He also insulted some “leftwing gay activists” who posted “ridiculous and ignorant remarks” about the attack, namely CNN commentator Sally Kohn, who “blamed all religions”  and blogger Perez Hilton who blamed the NRA.

Hoft wrote that he came out to his family and friends in the 1980’s during the AIDS epidemic, a “scary time to be gay.” But he never felt the need to come out publicly: “Like most gay Americans, I don’t wear my sexuality on my sleeve. I go about my daily business.”

After this week’s attack he felt compelled to come out publicly.

I’ve been a conservative activist for years. But today I’m coming out as a conservative gay activist. In the past few years I’ve built one of the most prominent conservative websites in America. I created The Gateway Pundit because I wanted to speak the truth. I wanted to expose the wickedness of the left. I was raised to love my country. Today I serve my country by defending her from the socialist onslaught. But last night at least 49 gays were slaughtered at an Orlando club.

Despite this obvious Islamic attack, Barack Obama and Hillary Clinton are still in denial. I can no longer remain silent as my gay brothers and sisters are being slaughtered at dance clubs… I pray that gays will come back home to the Republican Party – no more death. Dear God, please no more death.

Hours after Hoft posted his coming out piece on both The Gateway Pundit and on the equally conservative political blog Breitbart News Network, it was time for the Charles Johnson, founder of Little Green Footballs, another political blog to start the fact-checking process:

The idea that gays should “come home” to the Republican Party is so delusional it beggars description; this is the party whose presidential candidates openly endorse a far right pastor who thinks gays should be executed, a party that works ceaselessly to deny basic rights to LGBT people, a party that has tried for years to pass amendments to the US Constitution that would permanently ban gay marriage, etc., etc. The list of Republican anti-gay positions is practically endless.

For Hoft to say he “tries not to harm anyone” and wants to “speak the truth,” well — wow. Again, this is the guy who for years has been propagating every fake and/or dishonest right wing conspiracy theory that bubbles out of the fever swamp, a guy who spread a completely phony story that the cop who shot Michael Brown in Ferguson had suffered major injuries after being attacked by Brown and used a crudely altered version of a CT scan to do it, a guy who often cites white supremacist websites and has even plagiarized them for his crummy right wing blog, a guy who often refers to black protesters with dehumanizing terms like “roaches.”

Johnson wraps it up with a comment from a Breitbart reader, who was not exactly thrilled to find out that right-wing author Hoft is (surprise!) one of the gays.

You “pray”, yet call God a liar by trying to justify your homosexuality. God is very clear that homosexuality is an ACTION and an abomination in His sight. So according to God, there is no “gay”. Only a sinful act that He hates. As for me, the tragedy of it all is the 49 people who woke up in Hell yesterday because they knew not the Lord.