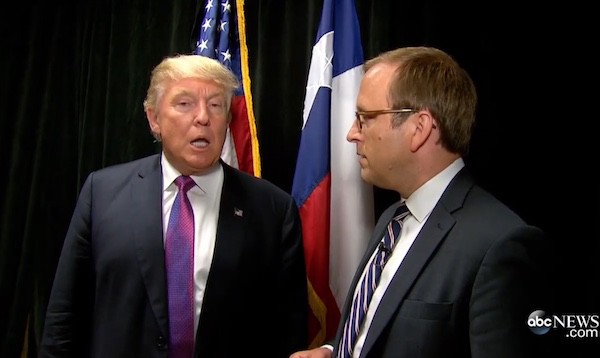 Donald Trump told ABC News reporter Jonathan Karl that he would consider following Obama’s tradition of issuing an LGBT Pride proclamation in the month of June.

“I would look into it. And I feel so badly what happened [in Orlando]. And we have to do something about it.”

RELATED: The Republican Misdirection on Gay Rights Won’t Fool Us into Forgetting the Hate

Trump then pivoted the interview to an attack on Hillary Clinton, repeating his already thoroughly debunked claim that he would be better for gay people than Clinton:

“And just remember. Some of these countries that are contributing to Hillary Clinton. Some of these countries where we’re taking in thousands of people. They kill gays. They kill gays. They enslave women. They enslave women. And yet they give money to Hillary Clinton. She accepts it. She wants more people to come into this country. Im better for women. I am better for gays. I am better for a lot of people.”