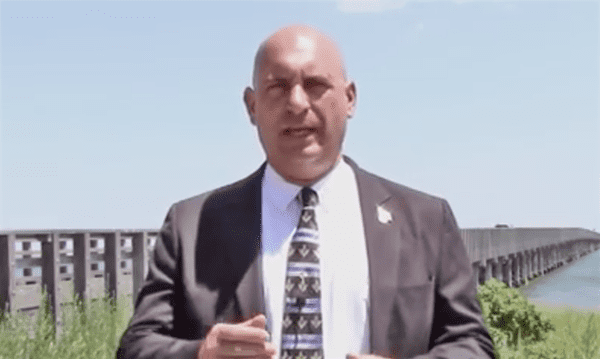 A candidate for sheriff in Plymouth County, Massachusetts is rebuffing claims made by his opponent that he is gay and anti-Semitic.

In a video posted to Vecchi’s Facebook, Vecchi he says “much to the dismay of gay men everywhere” he is not gay but that he has many gay friends and is an ally to the LGBT community.

“The minions at the sheriff’s department have begun spreading lies and rumors about me,” Vecchi said. “So I figured I’d take a minute to address them head on. The first one is that I’m gay. And while I have a lot of openly gay friends, and I’m a big supporter of the LGBTQ community, much to the dismay of gay men everywhere, I’m not gay. Sorry to break your heart.” […]

Vecchi also complained that his Marine Corps Scout Sniper tattoo is being depicted as a Nazi-style SS symbol. Vecchi said he has Jewish relatives, including his wife’s aunt and uncle who survived the Holocaust.

“I’m pretty sure she wouldn’t let me in her house if I was anti-Semitic or embraced those beliefs,” Vecchi said.