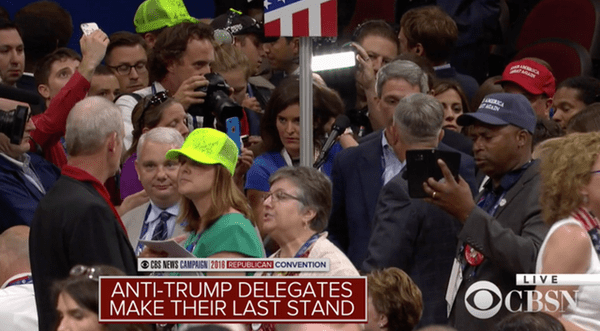 The Republican convention in Cleveland devolved into chaos on Monday as the chair shut down a parliamentary request for a roll call vote on adopting the rules of the convention.

The request for a roll call vote came from Never Trump forces that hoped to defeat the convention rules and rewrite new rules that would have ultimately allowed delegates to vote for a candidate other than Donald Trump.

The Hill reports on what the Never Trumpers intended:

Delegates Unbound, a group of delegates that support unbinding the delegates to free them from their pledge to vote for Trump, announced Monday afternoon it had secured enough support to force that roll call vote.

The delegates aim to vote down the rules package in its entirety in order to force the party back to the drawing board under pressure to unbind delegates.

When it came time to consider the roll call vote, the chair apparently ignored petitions submitted by Never Trump delegates.

The RNC also suggested that some delegates who signed petitions for a roll call vote ultimately changed their mind.

Arkansas Rep. Steve Womack brought up the Rules Committee report, which would keep delegates bound to Trump. Anti-Trump forces began shouting and wanting a roll call vote in a last-ditch effort to unbind GOP delegates and let them vote their “conscience.”

Their objections were shouted down by pro-Trump supporters. The package was passed on voice vote. Boo’s and chants were drowned out by cheers of “USA!” and Trump supporters.

Womack left the stage and left the podium, while the house band came on to play amid the confusion. He returned later and called a voice vote, where both “Ayes” and “Nays” were loudly heard. Womack ruled the Ayes had won.

THIS IS THE GOP CONVENTION. Btw. pic.twitter.com/nxuGuN2QgP

Anti-LGBT former Virginia AG Ken Cuccinelli was among those trying to force the roll call vote.

“This is disgusting,” [Cuccinelli] said to C-SPAN as delegates yelled over each other, some chanting “We love Trump” while others yelled for a roll call vote. Cuccinelli threw his credentials on the ground as chaos ensued.

.@KenCuccinelli says roll call was disrespectful to the grassroots. "You win an election by appealing to the voters" pic.twitter.com/GicgimVOdG

Former U.S. Senator Gordon Humphrey (NH) described the maneuver as fascist. Humphrey told MSNBC, “This is a meeting of brown shirts…people who act like fascists.”

The Colorado delegation walked out of the convention after the role call vote was denied.

Watch live video from the RNC, below.

Previous Post: « Okla. Gov. Mary Fallin: GOP Platform Not Anti-Gay Because Gay People Were on the Committee – WATCH
Next Post: Russell Tovey Teases You with His Muscles – LOOK »