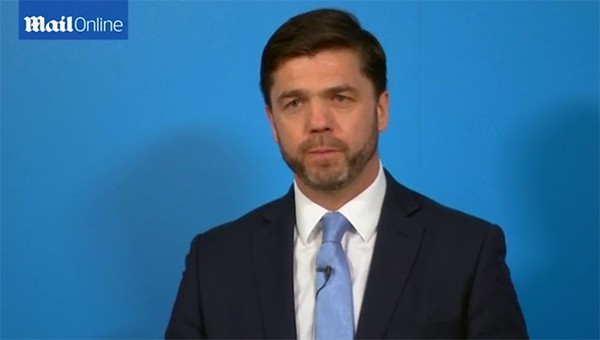 Stephen Crabb, one of the five candidates to replace David Cameron as the UK’s next prime minister had to deny his homophobic views when he launched his candidacy to become the next leader of the Conservative Party Wednesday.

Crabb presents himself as the “blue collar” candidate for the job. The BBC called him “a rising star of the Tory [Conservative] party,” and pointed out that because he was “raised on a council estate by a single mother, he has a back story to which many Tory Members of Parliament  are attracted.'”

“I genuinely believe that what I stand for, the values that I represent,” he said when he announced his candidacy “are exactly those required to get us through the challenges ahead.”

It’s a shame that some of those values which Crabb represents are a stance against anti-marriage equality and a belief in conversion (or ex-gay) therapy.

Or, at least, they used to be.

The Independent reported that “in 2013, Mr Crabb voted against extending marriage equality to same-sex couples. He has also been linked to an organization [CARE or Christian Action Research and Education], which has advocated that homosexuality and bisexuality can be ‘cured’.” It has in the past sponsored a “gay cure conference,” an event with “a special focus on how religious professionals and friends/relatives can respond biblically and pastorally to those struggling with unwanted SSA (same-sex attraction)”.

We support marriage as a lifelong commitment between one man and one woman. For this reason we, like many other religious and secular groups, stood against the introduction of same-sex marriage in the UK Parliament and in the Scottish Parliament during 2013 and 2014. We hold Government to account for the assurances they made about protections for people who cannot endorse the new definition of marriage.

Since the 1970’s, we have monitored the increasing impact of ‘adult’ material, which has become steadily more explicit and easy to access, especially through the internet. Pornography distorts reality; Leads to being unsatisfied by real life partners; Portrays people as prizes; Devalues sex.

London newspaper Metro reported that “Crabb started off his own parliamentary career by interning with CARE in the 1990s, and has reportedly maintained links with them since. In 2010, Crabb’s office hired interns from CARE.”

In March, however, after Crabb became Work and Pensions Secretary, he told The Daily Mail  that rumors that “he backs a ‘gay cure’ were ‘complete crap – I’ve never suggested being gay is a disease that requires therapy or a cure. I have great gay friends,’ he said”

So of the three main contenders, May hates immigrants, Gove hates the poor and Crabb hates gays. Wonder what Liam and Andrea have to offer?

#Crabb thinks it isn't an issue that he voted against equal marriage & wants gay people cured.

We beg to differ pic.twitter.com/MO9TdimTdl

Someone who supports gay 'cures' should not be considered fit to lead. Here's a cure for nasty #Crabb pic.twitter.com/N79vWkOTsL

So #Crabb is a homophobe? 😱 #disgrace Stephen Crabb forced to deny he is homophobic as he launches leadership bid https://t.co/BeUrk6YIfx