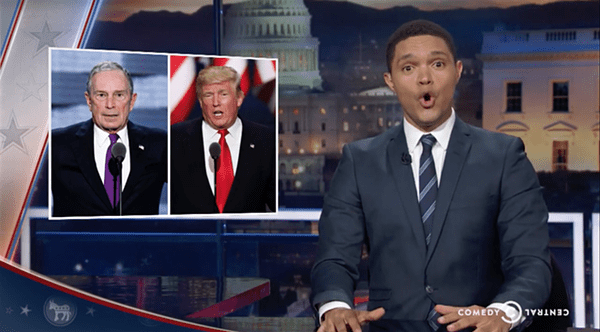 On The Daily Show with Trevor Noah on Thursday, Noah recapped the Democratic Nomination which ended in the historic nomination of Hillary Clinton, the first woman to ever be nominated by a major political party for president.

Towards the end of his segment, Noah also did an overview of the shade that billionaire and former New York Mayor Michael Bloomberg threw at Donald Trump. And it was delicious.

This went from a convention speech into a billionaire roast battle. ‘Hey, Trump, is that your plane or did my jet take a dump? Your private island is so small you didn’t even have to relocate a native population! Knock, knock! Who’s there? Yeah, you would answer your own door you broke a** b*tch!’”

Watch the full segment, which turns to Bloomberg at the 12:49 mark.