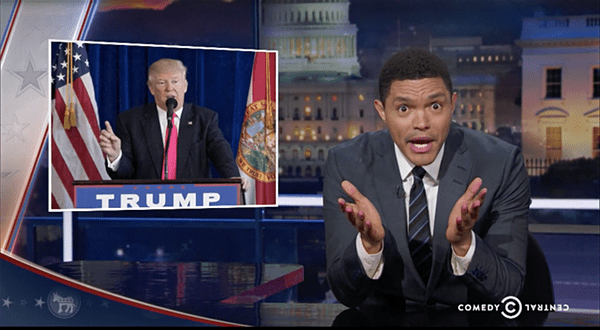 Sensing that he was losing the spotlight because this week is the Democratic National Convention, Trump held a press conference on Wednesday and told reporters,

“Russia, if you’re listening, I hope you’re able to find the 30,000 emails that are missing [from Hillary Clinton’s email account]. I think you will probably be mightily rewarded by our press.”

“Are you sh**ing me? Did this guy, a man running for president, just ask Russia to hack America?  Donald Trump called on a foreign nation to commit a crime to hurt his political opponent. This is what happened people, in real life. It’s not a matter of interpretation.”

And yet many Republicans and Trump’s staff tried to play off Trump’s treasonous remarks as a ‘joke.’

Noah proceeded to sound the alarm and make clear just how dangerous Donald Trump really is:

“This should be no contest… With Hillary Clinton, worst-case scenario, you have a bad president for four years, right? And America’s had bad presidents before. You’ll get through it. But America, you have never had a Donald Trump before.

A man claiming to be the leader law and order and make America safe candidate. That man who invites foreign hackers to steal files that he himself said contain national security data. That man. That’s a leader you’ve never had. A man who publicly admires and very possibly colludes with Vladimir Putin. A man who is lovingly endorsed by Kim Jong Un. A man who praises and doubles down on praising Saddam Hussein. These are his role models.

These people you have to understand, once they’re in power, they don’t go away. You don’t get to a chance to vote them out in four years. Their rule ends when the country ends. To all the people out there considering voting for Trump, I hope you enjoy your vote. Because on days like this, you realize, this could be the very last vote you will ever get.”