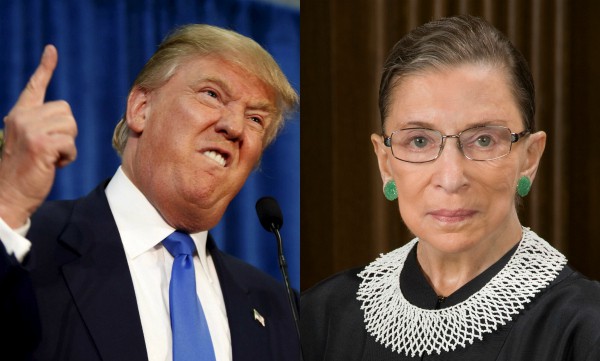 Donald Trump on Tuesday blasted Supreme Court Justice Ruth Bader Ginsburg for characterizing a possible Trump presidency as an unthinkable and negative prospect for the county.

Ginsburg made those comments in a Sunday interview with The New York Times. During that interview, she also jokingly hinted that a Trump presidency would be so bad as to merit a move to New Zealand. Via NYT:

It reminded her of something her husband, Martin D. Ginsburg, a prominent tax lawyer who died in 2010, would have said.

Trump responded to those comments by suggesting Ginsburg acting in a “highly inappropriate” fashion and that he hopes she will step down from the bench “as soon as possible”:

“I think it’s highly inappropriate that a United States Supreme Court judge gets involved in a political campaign, frankly,” Mr. Trump said. “I think it’s a disgrace to the court and I think she should apologize to the court. I couldn’t believe it when I saw it.”

He continued: “That she should be saying that? It’s so beneath the court for her to be making statements like that. It only energizes my base even more. And I would hope that she would get off the court as soon as possible.”

Donald Trump labeling out anyone else’s actions other than his own as inappropriate is the latest absurdity we are forced to endure this election cycle.

Previous Post: « Man Allegedly Strangles Boyfriend to Death at L.A. Sober Living Home
Next Post: Shawn Mendes Will ‘Treat You Better’ (and Takes His Shirt Off to Prove It) – WATCH »