Seth Meyers Takes A Closer Look At How Hillary And Trump Are Prepping For The Debates: WATCH - Towleroad Gay News 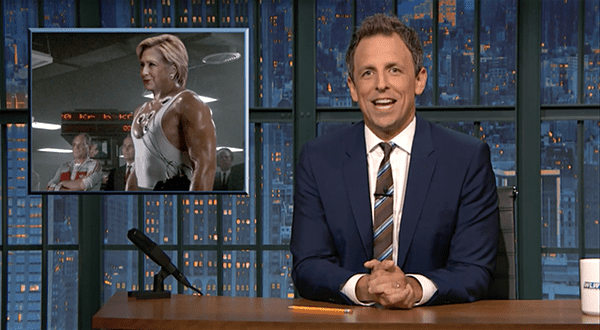 Seth Meyers dug into the preparation that both Hillary Clinton and Donald Trump are doing in the lead-up to the presidential debates.

Quoting The Washington Post, Meyers pointed out that Hillary is “methodically preparing for the presidential debates as a veteran lawyer would approach her biggest trial.” In other words, “just your laid-back classic Hillary.”

Meyers added, “Her prep sounds so intense I wouldn’t be surprised if she was hooked up to a bunch of computers with steroids being pumped into her veins like Ivan Drago.”

Trump, on the other hand, seems to have surrounded himself with an A Team. An A-hole team that is, made up of Rudy Giuliani, Roger Ailes and Steve Bannon. And yet despite Trump’s disdain for traditional debate prep, he will likely be able to get away without much preparation because, as Giuliani has pointed out, the bar is set so low for him.

Said Meyers, “Trump’s biggest advantage is how low the bar is currently set.Basically, as long as he doesn’t walk onstage, take a whiz on the side of the podium, and make up a story about how Hillary robbed him at gunpoint, he will exceed expectations.”

As for who will moderate the debates given that Trump has preemptively suggested that he likely wouldn’t get a fair shake from any moderators, Meyers doesn’t think the Commission on Presidential Debates should worry too much about finding someone Trump won’t object to. “The only way he won’t complain is if he gets to moderate the debate himself,” Meyers joked.