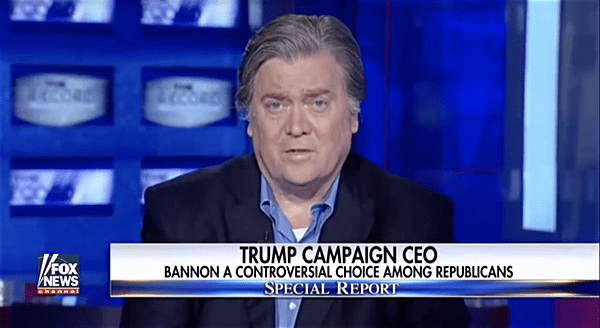 Donald Trump’s new ‘campaign CEO’ Steve Bannon once used an anti-gay slur to describe why progressives are baffled by conservative female politicos like Ann Coulter and her ilk.

In a 2011 interview, Bannon said that conservative women are denounced by the left because they aren’t a “bunch of dykes that came from the Seven Sisters schools up in New England.”

Bannon made his remarks in a radio interview while promoting his movie, Fire From the Heartland: the Awakening of the Conservative Woman.

“And so these women cut to the heart of the progressive narrative,” he said on Political Vindication Radio while promoting his movie, Fire From the Heartland: the Awakening of the Conservative Woman.

“That’s why there are some unintended consequences of the women’s liberation movement. That, in fact, the women that would lead this country would be pro-family, they would have husbands, they would love their children. They wouldn’t be a bunch of dykes that came from the Seven Sisters schools up in New England. That drives the left insane and that’s why they hate these women,” he said.

Bannon also claimed that the progressive moment is built on victimhood and that gay people on the left use their “sexual preference” to claim that they’re victims:

DNC spokesperson TJ Hemlstetter responded in a statement, saying, “Donald Trump should absolutely disavow his campaign CEO’s anti-gay slurs. It shocks the conscience that a major party nominee in the 21st century would stand by someone who uses hate speech directed at gay men and women. Trump’s divisive rhetoric and embrace of individuals who condone discrimination – like his running mate who is one of the most anti-LGBT governors in the country – show he is unfit to be president of the United States.”

This news comes on the heels of reports that Bannon was accused of sexual harassment by a coworker in the 1990s. Via The NY Daily News:

[Margaret] Augustine, a former boss at the company [Biosphere 2], said that Bannon would talk about the size of women’s breasts and once grabbed her wrist while dancing and told her “that once I’d done it with him I’d never want to do it with anyone else,” according to Buzzfeed.

Biosphere’s billionaire backer Edward Bass was the principal defendant in Augustine’s suit, which also alleged libel, slander and breach of contract and was filed after she was removed from the company.

You can listen to the 2011 interview, below.