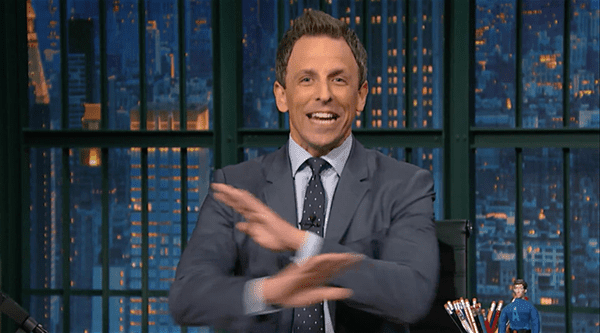 Seth Meyers has some advice for Democrats as the dumpster fire that is Donald Trump continues to burn during this election year: “Stay out of it!”

Said Meyers, “Obama, Hillary…Trump is digging his own grave. Don’t grab the shovel! Leave it to Republicans like Paul Ryan and Mitch McConnell to comment because, right now, those guys have got to be feeling like Dr Frankenstein.”

Meyers added, “Do as little as possible. If for some reason Trump actually does debate Hillary, she should just say, ‘Hi, I’m Hillary Clinton,’ and then she should turn off her microphone, open a big bag of Skinny Pop, and watch him slowly unravel. And then every ten minutes during the debate she should just shoot the camera a Jim Halpert look. That’s it! Stay out of it!”

Previous Post: « Melania Trump Responds to Allegations That She Worked in U.S. Illegally
Next Post: Fur Will Fly in ‘Where The Bears Are’ Season 5 – TRAILER »