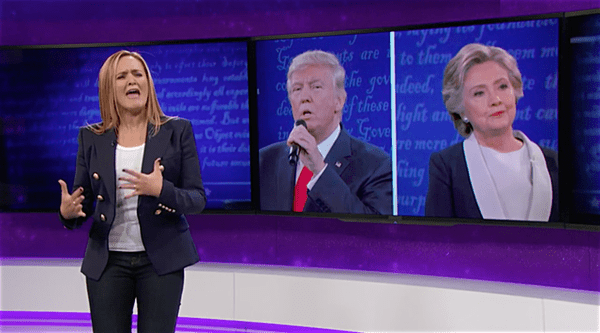 Samantha Bee was in fine form on Monday night, going in on Donald Trump for bragging about sexually assaulting women and then taking the GOP to task for their tepid response to Trump’s disgusting remarks.

Bee then attacked Republicans who went on about how offended they were by Trump’s remarks ‘as a father, a son, and a brother’ of women.

As for Paul Ryan’s spineless refusal to un-endorse Trump despite rebuking the things he says and does, Bee said of the House Speaker,

“You don’t have the courage of a single one of your convictions. But you were smart to disinvite Trump from your Fall fest, he wouldn’t have been able to resist grabbing a pussy like you.”

As for the real GOP champion of women, that title belongs to Republican strategist Ana Navarro.

In case ‘p—y-gate’ wasn’t bad enough. We all had to endure the second presidential debate–which included Donald Trump trotting out Bill Clinton’s accusers from the 90s.

Bee joked, “God damn it Bill Clinton! Why can’t we just lock him and Donald Trump in a closet to grope each other to death?”

The point is, however, that “None of this is Hillary’s fault and none of this erases what Donald did.”

And it also isn’t a smart strategy for Trump to try and win America over by attacking a wronged wife. “We love wronged wives,” Bee said. “This is the same America that is still obsessed with Jennifer Aniston. Her ex-husband has split up with the woman he cheated on her with and we still want to know if she’s okay!”

Bee also read Trump to filth for his repeated attempt to dismiss his remarks as nothing more than ‘locker room talk.’ “You weren’t in a locker room you sleazy pair of sweat socks, you were at work,” Bee said.

As for the press conference Donald held before the debate with Bill’s accusers, Bee had the perfect response:

“You didn’t grab these women out of Bill Clinton’s hot tub time machine because you care that they were hurt you just want to use them to hurt another woman. And you’ll drop them like an over 35-year-old p—y as soon as they’ve served your purpose.”

“All you’re doing by brining up Bill Clinton is reminding us how much we don’t want another groper-in-chief. And if you think you’re going to drag us back to that Maxim magazine decade of cum-stained dresses and pubic hairs on coke and pussy-grabbing man-babies then you must be on crack. Sorry I meant coke.”