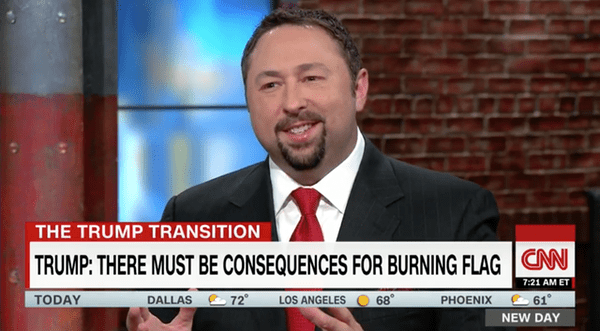 Oxford Dictionaries wasn’t kidding when they named ‘post-truth’ as the 2016 word of the year.

On Tuesday, Trump representative Jason Miller went on CNN and refused to acknowledge that burning the American flag is legal and protected under the 1st Amendment, according to the Supreme Court.

“I think most Americans would agree with me that flag burning should be illegal,”  Miller said. “It’s completely despicable.”

CNN host Chris Cuomo kept trying to get Miller to acknowledge the 1st amendment protections that apply to flag burning, but Miller would have none of it.

“Flag burning should be illegal. End of story,” Miller insisted.

Miller’s comments came in reference to a tweet Trump posted at 6:55 AM EST on Tuesday, in which he said, “Nobody should be allowed to burn the American flag – if they do, there must be consequences – perhaps loss of citizenship or year in jail!”

Trump’s statement–seemingly apropos of nothing– has not received support from everyone in his own party.

Rep. Kevin McCarthy, who was once in the running to be Speaker of the House after John Boehner stepped down, told MSNBC on Tuesday, “We have a First Amendment right. We’ll protect our First Amendment. That’s what the court has upheld.”

More from The Hill:

Rep. Sean Duffy (R-Wis.), meanwhile, said he does not side with Trump on the controversial act.

“I don’t think we want to make this a legal issue, so I disagree with Mr. Trump on that, and the court is probably right,” he said on “New Day.”

“I think the court is probably right that we want to protect those people who want to protest and their right to actually demonstrate with disgracing our flag, even though so many of us love our country and love our flag object to it.”

Previous Post: « Idina Menzel Belts Out ‘Wind Beneath My Wings’ in First ‘Beaches’ Trailer – WATCH
Next Post: NYC Gay Men’s Chorus and the Golden Girls Puppets ‘Thank You For Being a Friend’ – WATCH »