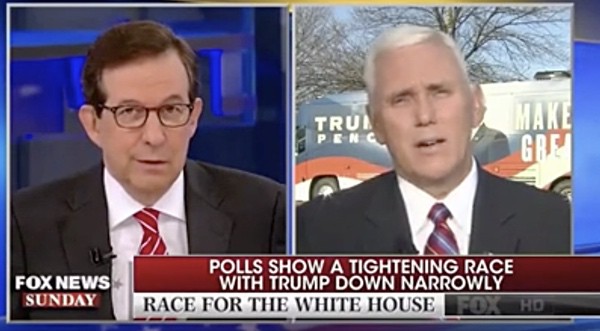 Chris Wallace asked Mike Pence on FOX News Sunday how the Trump campaign plans to go over the top in the next 48 hours given the fact that they’re behind in all the polls.

Pence insisted that Hispanics are coming out for Trump despite reports that they are turning out early in big numbers in states like Nevada, Florida, Arizona, North Carolina and other states.

Responded Wallace: “So you think that all those Hispanics, sir, are coming out to vote for Trump and not for Clinton? Really?”

Wallace later moved on to the subject of concession and returned to promises by Donald Trump that people would have to “wait and see” whether he would accept the results:

“The campaign has made it very clear. A clear outcome obviously both sides will accept. But I think both campaigns have also been very clear that in the event of disputed results they reserve all legal rights and remedies.”

Previous Post: « Samantha Bee Rattles Off Every Trump Epithet She’s Ever Used on Her Show: WATCH
Next Post: FBI Director James Comey: Nothing Discovered in New Emails to Warrant Charges Against Clinton »