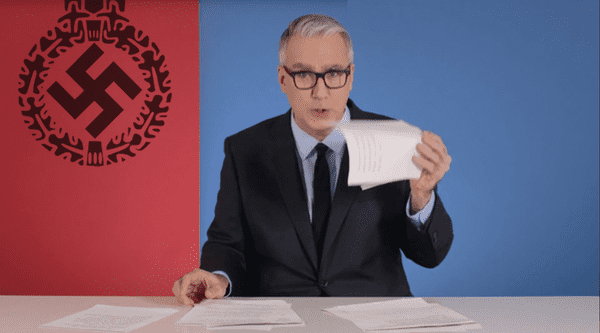 In his latest episode of The Closer, Keith Olbermann explains that what we have witnessed in the rise of Donald Trump is eerily similar to what Germans in the 1930s saw when an obscure painter-turned-politician named Adolf Hitler rose to power buoyed by his rowdy and violent band of supporters.

What happened in Germany and what has happened now is what Olbermann calls “the normalization of repression and horror.” Coming from German ancestry, Olbermann admits that he has often wondered “what would it be like to see my country devolve and deteriorate from democracy from mindless, soulless, cult worship,” as distant relatives of his must have in the 30s. “Thanks to Donald Trump,” he’s getting a chance to find out.

In recent weeks and months, Trump supporters have shown how they are poster-children for anti-semitism, homophobia, misogyny and racism in much the same way that Hitler’s supporters were. (But whatever you do, don’t call them deplorable.)

Yes, we’ve seen this all before–during some of history’s darkest hours.