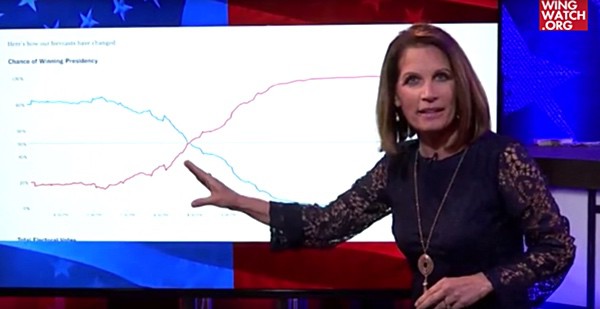 Michele Bachmann last night pointed to a graph produced by the New York Times that shows when the race began breaking for Donald Trump and said it was because, at that moment, at 8:30 pm, she and her followers began praying.

“We have a prayer room here. We had people all across the United States joining with our prayer room here in Dallas in prayer, and look what happened. This was the moment. This was the moment when the whole race broke, when prayer began, when the church came out and then we see a 30-point swing here, a 30-point swing here and now we see the swing to a 95 percent chance of winning Trump, a five percent chance of winning Clinton. It’s phenomenal!”

“This graphic produced by the New York Times should tell believers and pastors the power of prayer, the power of action.  Already we know that the glory goes to the God Almighty, the God of the Universe, the Sovereign Lord. He is the one who did this for us. He did, because His people got on their knees and cried out to Holy God and said, ‘We can’t go down this road any more, Father, we ask you for your mercy.’ And this is the proof positive of what the Lord did. The Lord did this!”

Bachmann advised Donald Trump on foreign policy and issues of concern to Christian conservatives during the campaign, and served as part of his Evangelical Executive Advisory Board. Surely, she’s hoping for a job in a Trump administration.