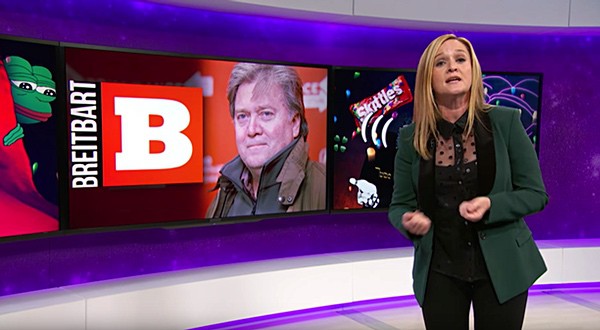 As a special treat for Halloween, Samantha Bee grabbed her viewers by the eyeballs, “and dragged [them] through an endless nightmare” called the Alt-Right.

“Imagine a small swarm of venomous pests trying to turn the party of Lincoln into the party of Pepe [the frog],” she explained.

The Trump campaign has been “like Christmas morning” for white nationalists, Bee said, but  “how exactly did America’s wall-building, Muslim-banning, birther-in-chief become the darling of the racist fringe?”

Bee explained that while Trump didn’t invent racism (“It would have gone bankrupt years ago”) he has provided a safe space for these numbskulls to make their feelings known:

“Basically alt-right is a big tent, or rather a big rock, under which which creeps a diverse assortment of paleo-conservatives, men’s rights misogynists, right-wing populists, anti-p.c. crusaders, Jew-baiters, white ethno-nationalists, southern secessionists, Islamaphobes, Holocaust deniers, self-described satirists, trolls, doctors, cyberbullies and good old-fashioned neo-Nazis. And Trump’s current campaign commandant (Steve Bannon] is the guy who feeds them and makes sure they can spread out enough not to drown in their own shit.”