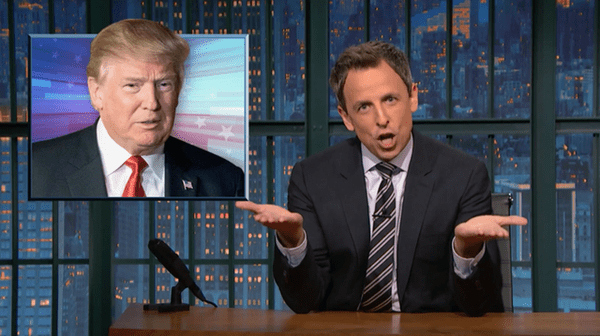 With the polls tightening in the final days of the 2016 election, and Democrats freaking out about the prospect of Hillary Clinton losing, Seth Meyers took a closer look at the tough decision facing Republican and Independent voters as November 8 draws nigh.

After all, these voters have a really difficult choice. Do they choose between someone who made the poor choice of keeping a private email server while Secretary of State, or do they choose the guy who, as Meyers points out…

“Called Mexicans rapists
Claimed the president was born in Kenya
Proposed banning an entire religion from entering the U.S.
Mocked a disabled reporter
Said John McCain wasn’t a war hero because he was captured
Attacked the parents of a fallen war hero
Bragged about committing sexual assault
Was accused by 12 women of committing sexual assault
Said some of those women weren’t attractive enough for him to sexually assault
Said more countries should get nukes
Said he would force the military to commit war crimes
Said a judge was biased because his parents were Mexican
Said women should be punished for having abortions
Incited violence at his rallies
Called global warming a hoax perpetrated by the Chinese
Called for his opponent to be jailed
Declared bankruptcy six times
Bragged about not paying income taxes
Stiffed his contractors and employees
Lost a billion dollars in one year
Scammed customers with his fake university
Bought a 6-foot painting of himself with money from his fake foundation
Has a trial for fraud coming up in November
Insulted an opponent’s looks
Insulted an opponent’s wife’s looks
And, bragged about grabbing women by the pu**y.”