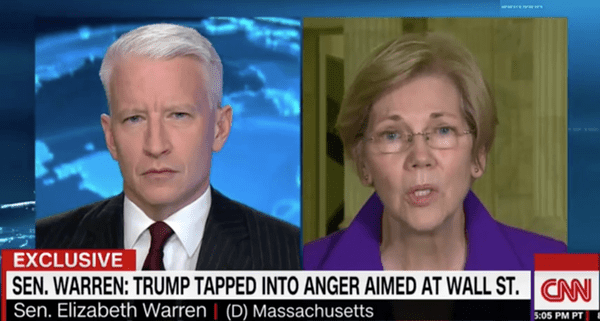 In particular, Warren attacked Trump for naming Steve Mnuchin as his pick for Treasury Secretary. Warren said that in picking Mnuchin, Trump is essentially “handing the keys to the treasury over to a wall street banker who helped cause the crash.”

Warren also criticized Trump for reneging on his campaign promises. “He promised that he was going to run this government for the American people and not for Wall Street,” Warren said. “And what he’s just done is he’s just put a Wall Street-er in charge of the Treasury.”

Mnuchin “bought a bank that made its fortune by squeezing people hard on foreclosure,” Warren said, adding, “That’s the person who’s going to be the chief economic officer of the United States.”