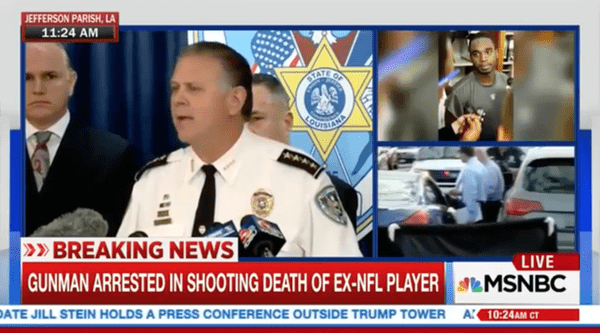 Sheriff Newell Normand of Jefferson Parish, Louisiana surprised newscasters on Tuesday when he read a series of gay and racial slurs that were posted on social media responding to his handling of the Joe McKnight case.

McKnight, a former NFL star, was shot and murdered in Louisiana last week by a 54-year-old man, Ronald Gasser. Gasser was brought in after the shooting by police but then released without being charged, leading to furor on social media from activists who said Gasser’s release and McKnight’s murder were racially motivated. (McKnight was black. Gasser is white.)

On Tuesday, Normand held a press conference after Gasser was charged with manslaughter and denied that race was a factor in this case. “This isn’t about race. Not a single witness has said … a single racial slur was uttered,” Normand said.

During his press conference, well aware that national news cameras were on him, Normand read aloud gay and racial slurs that were used in comments directed at him on social media. This prompted MSNBC to cut away from the press conference.

“It’s not fair for him to be called, ‘You punk-a– Uncle Tom coon, we saw you sell out to them, you rata– f—ot punk,’” he read. “That’s the tone of what we call our elected leaders for standing up and simply saying let justice prevail and let the process take its course.”

Anchor Tamron Hall decided to “pivot” as Normand was reading another comment that started with, “You a—kissing f—ot.”

“First of all, let me apologize for some of the language we were not expecting,” Hall said. She again apologized for the “racial slurs and homophobic remarks that we did not prepare and did not honestly expect from the sheriff of a police department.”

The sheriff went on to read tweets that included the n-word, as well.

Normand also refused to address concerns over the role race played in McKnight’s murder and suggested that fear of racially-motivated crime is unfounded:

When a reporter pushed back by asking if Normand understands “where that fear and anger comes from,” he responded by explaining “black-on-black crime” statistics.

“78 percent of the murders are committed by black perpetrators, and 78 percent of the victims murdered in this parish are black,” Normand said. “So if we’re just going to look statistically, your fear — what you’re trying to articulate right now — is misdirected.”

Watch the MSNBC clip, below.

Previous Post: « Can We Get Rid of the Electoral College?
Next Post: Male Teen at Heart of Mike Yenni Sexting Scandal Stands by Story: VIDEO »