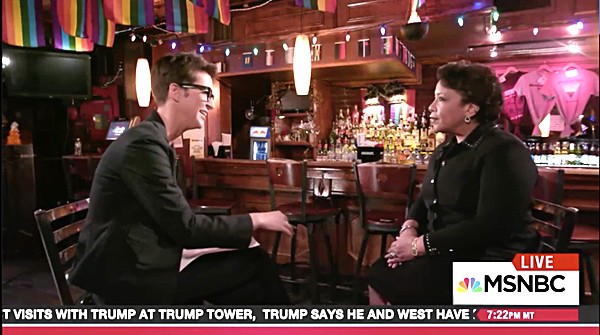 Rachel Maddow sat down with Attorney General Loretta Lynch at the newly designated national historic landmark The Stonewall Inn to talk about the election, LGBTQ rights, Donald Trump, and where we go from here.

North Carolina’s bathroom bill and Lynch’s message to the transgender community about that bill. Said Lynch at the time, “We see you. We stand with you…And please know that history is on your side.”

Maddow asked Lynch what happens now, when the DOJ looks like it won’t be on the side of the LGBTQ community: “Do you feel like you can really say history is on your side, things are bending in your direction?”

“A lot of things change with the turn of the electoral wheel. But history is bigger than just the electoral wheel. History is bigger than any one administration, or even any one attorney general. History encompasses all of the change and the progress that we’ve made, and history is on the side of marginalized people who speak up for themselves. Of people who feel isolated and left out, who speak up for themselves. That doesn’t mean there won’t be challenges. But this work has always been hard.”

In the second segment, Maddow and Lynch talked about the Department of Justice and the potential for Donald Trump to weaponize the agency to attack personal and political enemies.

Maddow talked about how Trump “seems to relish” going after his enemies: “Could the president with that mindset use the DOJ to hurt his enemies?”

Replied Lynch: “The DOJ has a history of independence that is longstanding. It is cherished by career people who take that independence very seriously…this is also the responsibility of everyone, to watch what’s going on….don’t let fear determine how you behave and how you react.”

They also discussed the transition between administrations and how it’s going.

In the third segment, Maddow asked Lynch about Russian interference in the election: “Should we expect that there will be a DOJ component to the investigation, potentially prosecution of this Russian hacking into the election.

Replied Lynch: “A lot of that is still an ongoing investigation…the president has asked us to review efforts to interfere or hack into the electoral process…it will be reviewed from a variety of angles.”