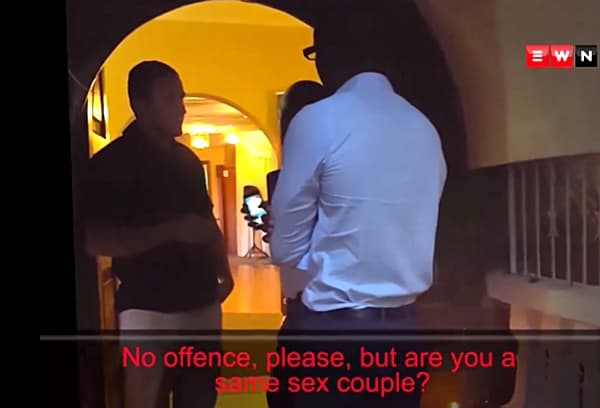 The Lake Restaurant, a dining establishment near Johannesburg, South Africa, was caught discriminating this week when it forbid Eyewitness News journalists Clement Manyathela and Victor Magwedze, who were posing as a gay couple, from sitting down at the restaurant’s date night.

In an SMS, which is sent out once a booking has been made for “date night”, the restaurant stipulates that same-sex couples are not welcome…

…On Monday, restaurant owner Sami-Jo Amiras told News24: “Date night is a themed event designed for a man and a woman.

“The reason for stating ‘no same-sex couple’ is not meant to discriminate against anyone, but to control a couple’s event.”

The South African Human Rights Commission (SAHRC) is looking into the matter. Spokesperson Gushwell Brooks said the equality clause of the Constitution stated clearly that discrimination based on sexual orientation was unacceptable.

“There are numerous establishments that still refuse entry or services to people based on their sexual orientation and that this is obviously in breach of our right to equality,” he said.