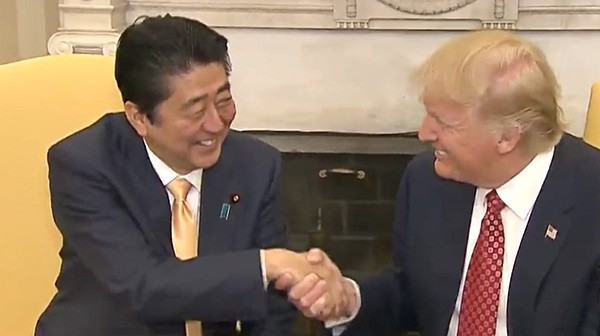 Check out the not-awkward-at-all 19-second handshake between Donald Trump and Japanese Prime Minister Shinzo Abe, the gritted teeth, and Abe’s eye roll at the end.

Another perspective. Yep it was that awkward:

An honor to host Prime Minister @AbeShinzo in the United States. pic.twitter.com/f6TvfZ6sMj

Politico notes that the body language so far has been unusual:

The president greeted Abe like an old friend Friday morning, meeting him personally at the front door to the West Wing, where the two men hugged, shook hands, then hugged again. That interaction, too, seemed a bit off, with Trump appearing unprepared for the second hug.

Later, at their bilateral press conference, Trump elaborated on the greeting, saying, “I shook hands, but I grabbed him and hugged him because that’s the way we feel.”

Trump began the press conference by welcoming Abe to the “very famous White House” but focused his opening remarks largely on the defense and trade relationships between the U.S. and Japan. As he wrapped up, Trump said he and Abe have “developed a great friendship” and that the two have a “very, very good bond” and “very, very good chemistry.”

“I’ll let you know if it changes, but I don’t think it will,” the president said.

Abe, in his remarks, brought up Trump’s utter lack of political experience and then attributed his victory to the “the dynamism of democracy.”

At the end of the handshake, Trump pantomimed a golf swing and said “strong hands” which leads to the more pressing issue, their weekend golf date at Mar-a-Lago, which of course raises a boatload of ethical questions:

“The president, in going about his work, should be completely separate from his commercial interests,” Wonderlich told NBC News. “The concern here is that by hosting foreign leaders at his resort he is directly receiving money from a foreign government.”

And if Trump is putting Abe up for free “he is then donating money to a foreign government,” said Wonderlich, who is weighing whether to file a formal complaint with the Office of Government Ethics. “So there is clearly a conflict of interest.”

Jordan Libowitz of Citizens for Responsibility and Ethics in Washington agreed.

“On the legal side, if the Japanese government is spending any money at Mar-A-Lago, the president is further violating the foreign emoluments clause of the Constitution,” Libowitz, whose organization is already suing the Trump Administration for alleged ethical violations, said in a statement.