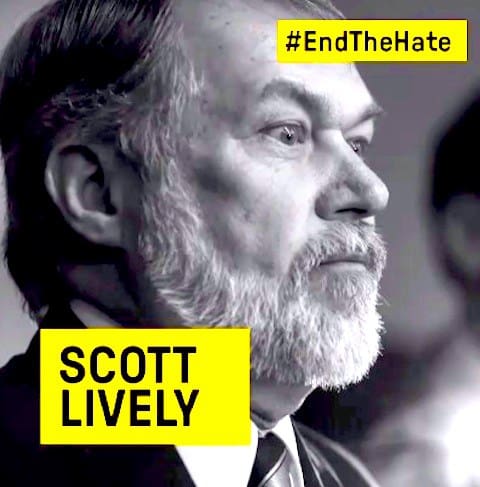 In his unhinged piece titled The Obama/Soros/Media Shadow Government and the Illusion of Chaos, Lively argued that “‘gays’ and homosexualists” in the media are responsible for “the ongoing treasonous sabotage of the Trump administration.”

Trump, he continued, must not “leave the ‘gays’ in the swamp” but should “take the bold and courageous step of revoking Executive Order 12968 and restoring the ban on ‘gays’ in the intelligence agencies as it existed until 1990.”

Satan is not creative. His strategies and tactics are tediously predictable, once you recognize them. Of course, it’s not easy to stand firm when it seems like you’re about to be engulfed by a mountainous rushing wall of fire, but if you do stand firm the illusion vaporizes on contact and you realize it was a lie. Once you’ve stood up to that wall a few times it loses most of its effect on you.

No group is better at this satanic strategy than the “gay” political movement, which was an unstated reason why open homosexuals were never allowed into the intelligence agencies in the history of the nation, a policy upheld by the none other than the 9th Circuit US Appeals Court in the 1990 case, “High Tech Gays v. Defense Industrial Security Clearance Office.” (Indicating just how dangerous to our nation the idea of homosexual spooks was even to the farthest left-wing judges in the country: J. Edgar Hoover was by no means an anomaly.) But then along came Bill Clinton who issued Executive Order 12968 on August 2, 1995, opening the intelligence agencies and top secret security clearance to the Machiavellian “gay” network.

That policy continued under W. Bush, and when Obama came into office the floodgates really flew open. My guess based solely on my knowledge of the “gay” movement and Obama’s personal priorities, is that the today’s alphabet soup of intelligence agencies could easily be condensed to just four letters: LGBT, since that’s almost certainly who’s driving the agenda evidenced in the ongoing treasonous sabotage of the Trump administration.

More critical to the process of creating the false reality by which the far left has steered American public policy for decades is the mainstream media. Again, an industry so heavily dominated by “gays” and homosexualists that there is no longer even a pretense of balance on stories related to LGBT issues. Pro-family views are openly equated with racism and denied inclusion in news reporting. That same subjectivity and arrogance drives their narrative on their entire slate of issues.

My greatest concern about the Trump administration is that secular-minded advisors will allow self-defeating politically-correct assumptions to convince them to leave the “gays” in the swamp, assuming that will win them points with the ultra-powerful LGBT lobby and the larger progressive community it dominates, as well as crossover libertarian and secularist constituencies.

My prayer is that President Trump will awaken to the correlation of anti-Trump radicalism on the left with the “gay” movement and realize that on virtually any issue one can name the most aggressive liars and agitators are homosexuals and their closest surrogates, and that these people absolutely, positively cannot be placated (just ask the Boy Scouts of America). In other words, there is a spiritual dimension to the culture war in which the key common denominator is LGBT affiliation.

I call on Mr. Trump to adopt my earlier recommendation to establish a “Separation of LGBT and State” as outlined here.

I further urge him to take the bold and courageous step of revoking Executive Order 12968 and restoring the ban on “gays” in the intelligence agencies as it existed until 1990.

In 2014, Lively said that homosexuality is an “infection” worse than murder.