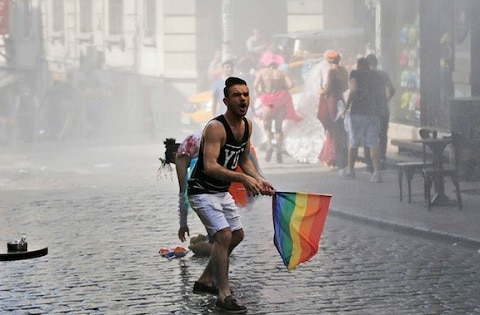 The winner of a contest held in Istanbul last year meant to empower and highlight gay Syrian refugees has reported his situation as deteriorating.

In an interview last week with German public news service Deutsche Welle, Hussein S.—who asked his surname not be used owing to his cautiousness—said he is feeling the glare of the attention the event brought him, feeling exposed not only in a city where anti-LGBT sentiment is on the rise, but with his own Syrian relatives who have threatened him if he did not “return to the right path.”

The contest was organized by an LGBT Syrian refugee center in Berlin “to create a media buzz,” said organizer Mahmoud Hassino. It certainly did, although the Mr. Gay Syria winner could not obtain a visa to travel to the Mr. Gay World event in Malta. At the time, Hassino felt Istanbul was still relatively accepting of its LGBT population, especially in comparison to places from which refugees such as Hussein had fled, but his opinion has since changed. Developments such as the banning and crackdown against Istanbul’s gay pride parade last year have created a chilling effect. Hussein himself has seen the change on the ground:

Istanbul, too, has become much less tolerant, Hussein said, with small pockets where queer-identified people could freely express themselves quickly disappearing. “There used to be parts of the city where you could openly show that you’re gay, where no one cared who you are.”

While Hussein had registered for the pageant for fun, and won by acting out a scene in which a man visits his mother’s grave, despondent over his family’s plan to marry him off to a female cousin, he started to receive harassing telephone calls shortly afterwards. He had come to Turkey and Istanbul in order to live more openly, but it seems that his past is even more difficult to escape than he knew.

Now, however, if Hussein and his Syrian boyfriend, with whom he shares a flat, don’t manage to leave Istanbul soon, he might one day regret the attention that the Mr. Gay Syria pageant has brought him. He registered for a UN resettlement program two years ago – and is still waiting.

Hussein said he was desperate to leave Turkey as soon as possible: “I don’t know, I might disappear.”

From Berlin, Hassino says he has tried to do what he can in order to help the five contestants who took part. One has managed to reach Norway to join a boyfriend, another is in Greece, another has gone north under uncertain circumstances, while another, like Hussein, remains in Istanbul. He has tried to pressure the German government to intervene, as well. The best of intentions have run into the still-grim reality, but the vision behind them still maintains:

For his part, on Valentine’s Day and a year after being crowned Mr. Gay Syria, Hussein said he had not given up hope: “I dream of living in a country where I can walk down the street and hold my boyfriend’s hand.”