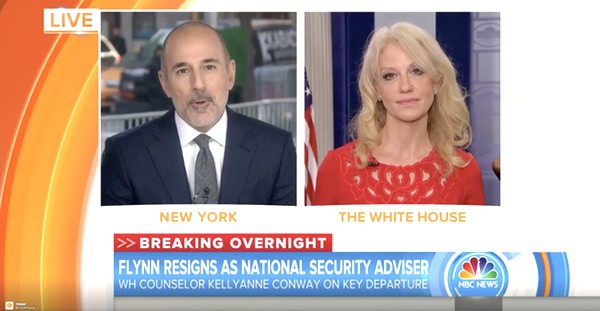 Kellyanne Conway was on the morning shows this morning trying to spin the Michael Flynn resignation debacle, but Trump’s most proficient propagandist is having a hard time spinning her way out of this one.

Matt Lauer told Conway her explanation “makes no sense” after Conway says that his appointment became “unsustainable,” pointing out that Trump and Pence were told by the Justice Department almost three weeks ago that he was in danger of being blackmailed.

“You’re saying that was the straw that broke the camel’s back, but the White House knew about that last month when the Justice Department warned the White House that Mr. Flynn, or Gen. Flynn, had not been completely honest in characterizing that conversation with the Russian ambassador. They even went further to say that as a result of that dishonesty, he was at risk for blackmailing by the Russians.”

Conway then went on ABC’s Good Morning America and tried to continue her spin. Stephanopoulos wasn’t buying it either.

Conway’s explanation seems to be that he continued in his job, an explanation that doesn’t mean anything at all.

“I’m not here to say who knew what when…I don’t know all the details.”

Conway can’t say why the White House did not respond to DOJ news that Flynn was vulnerable to blackmail for three full weeks.

And it looks as though Morning Joe has given up on Conway, saying she’s “not worth” bringing in for an interview.

Said Scarborough: “She goes out and lies and you find out about those lies a couple hours later…She’s in none of the meetings and she just goes out without talking without having the facts.”