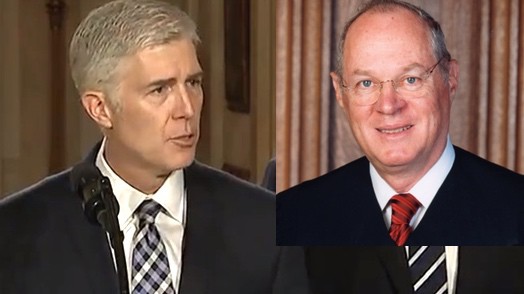 When Donald Trump, who lost the popular vote, nominated Neil Gorsuch, a far right jurist by any measure, to fill the vacant seat on the Supreme Court, Mr. Trump was doing two things.

First, he was filling a seat that should have been filled by President Obama. He was also fitting another puzzle into a longer game to make the Supreme Court even more conservative than it is now. Neil Gorsuch is a signal to Anthony Kennedy that Donald Trump can be trusted to nominate someone legitimate to fill Anthony Kennedy‘s seat.

READ THIS NEXT: Neil Gorsuch is Trump’s Terrible, No Good Nominee for the Supreme Court: An Analysis

One of the principal concerns moderate and mainstream conservative Republicans had with Donald Trump was his erratic, unprincipled, uncontrollable nature. He flies into a blind rage when Meryl Streep criticizes him. He tweets at 3:30 am that the crowds at his inauguration were the largest in the history of everything (a demonstrably false claim). He appoints Steve Bannon, a racist, so-called “white nationalist”, as his virtual co-president. As many of us know, Donald Trump is as heinous as he is crazy. That doesn’t sit well with establishment figures like Jeb Bush (remember him?), Lindsey Graham, or, one might guess, Anthony Kennedy.

Justice Kennedy is, and always was, a conservative. He was to the right of Justice Sandra Day O’Connor when she was on the Court and serving as the middle, tie breaking vote between the right and moderate wings. When she retired and was replaced with Justice Samuel Alito, a conservative on the Court, the Court shifted right because Anthony Kennedy became the tie-breaking center. And, as a Republican appointee, Kennedy may follow what has, over time, become a general custom: wait to retire until a president of the same party as the president that nominated you can appoint your replacement. Admittedly, this isn’t always followed: Justice Stevens was appointed by President Ford, but he retired during the Obama Era.

Judge Gorsuch is a signal to Justice Kennedy regarding his own possible retirement. Gorsuch clerked for Justice Kennedy. The former is, by all accounts, a lovely, kind man, with none of the closet skeletons that usually sink a nomination. Kennedy knows Gorsuch. He knows Gorsuch is a brilliant jurist, with impeccable credentials. He might not agree with Kennedy on all the issues, but that is not the point. Neil Gorsuch is a nod to Kennedy that Trump can be trusted to nominate a principled judge (most likely, a man) to take his place when he’s ready to retire.

And that should steel our resolve even more.