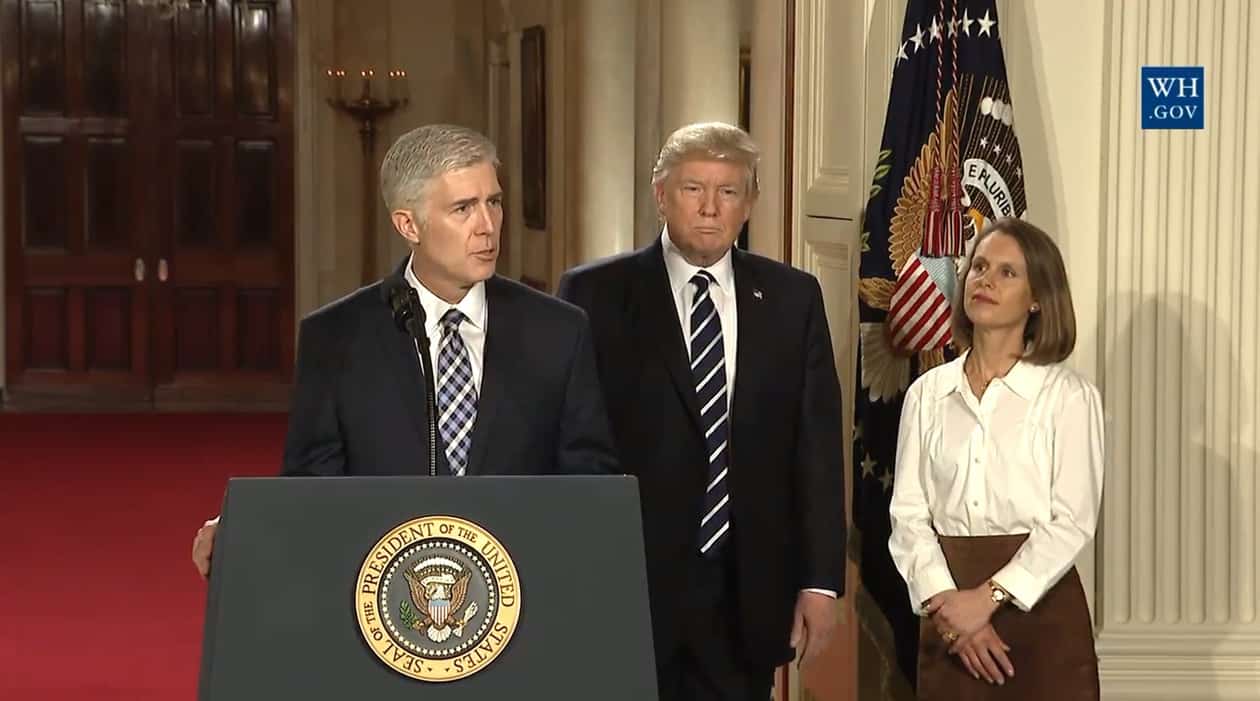 Donald Trump, who lost the popular vote, just nominated Neil Gorsuch, a hardcore conservative, to fill a seat on the Supreme Court.

That seat was only open because Republicans in the Senate stole it. And Senate Democrats need to stand firm and reject this nominee — and any others — until Mr. Trump nominates someone who stands at the center, where most Americans are. That person’s name is Merrick Garland. Democrats have done this before, ultimately confirming Anthony Kennedy over Robert Bork. It’s time to flex those muscles again.

Gorsuch, 49, is a judge on the Tenth Circuit Court of Appeals, which is based in Denver. He’s been called “cerebral” and “brainy” by various media outlets. But regardless of how smart he is — he’s a graduate of Harvard Law School (and was in Cambridge, MA at the same time as President Obama) and studied at Oxford as a Marshall Scholar — he’s a radical Scalia-like “originalist.”

He answers Constitutional questions by considering how the Framers would have interpreted the plain language of the text back in the Eighteenth Century. To originalists like Gorsuch (and Scalia), the Constitution was encased in carbonite the moment it was written.

This approach is a convenient pretext for pushing a conservative ideology. Many of the basic rights we consider essential to a modern, progressive society — privacy, gender and sexual orientation equality, the right to choose — are not explicitly written in the Constitution. And there is little evidence that Alexander Hamilton and James Madison were thinking about a woman’s right to choose (actually, a woman’s right to do anything) when they drafted and argued for ratification. Originalism also represents a shirking of the judicial role: a lot has changed since 1789.

Several areas of Judge Gorsuch’s jurisprudence should cause us grave concern.

Last year, Judge Gorsuch joined a radical dissent in an Obamacare case, arguing that the lack of a carve out for religious employers made the law unconstitutional. In short, Gorsuch argued that an employer should have the right to deny access to contraception to their employees if contraception violates the employers’ interpretation of their religious obligations. This trend of religious exceptions lawsuits and statutes represents an extraordinary danger to our rights. Few of us expect the Supreme Court to reverse itself on marriage equality.

But with Judge Gorsuch, there are four justices on the Supreme Court — along with many conservative judges on the appellate and district courts — who are willing to cut out an enormous donut hole in equality laws that would allow private business to deny service to gay persons if homosexuality violates their religious beliefs. They would even allow government officials to deny constitutionally protected rights to gay persons and gay couples (including marriage) if doing so would violate their religion. If this dark future comes true, it would entirely neuter marriage equality or public accommodations laws. And Judge Gorsuch appears to be on board with doing just that.

Second, the power of the regulatory state.

This is a bit more arcane, but it suggests just how radical Judge Gorsuch really is. There is a famous Supreme Court decision from 1984 in which the Court stated that when federal laws are written in ambiguous ways, courts should defer to the reasonable interpretations of the implementing agencies. For example, say a law prohibits “the release of unsafe amounts of chlorofluorocarbons.” The Environmental Protection Agency is staffed with experts in this area, with degrees in science fields that have given them the knowledge to determine what is and what is not “unsafe.”

Because they’re the experts, the Supreme Court said that courts should defer to them. Judge Gorsuch disagrees with this ruling. He thinks judges know better. This is once again a pretext for enforcing a conservative ideology on policy. Regulatory agencies are, by nature, focused on regulation. When you take power away from them, you neuter regulations. And that’s a dream of the Koch Brothers and the robber baron in the White House right now.

Judge Gorsuch, though by all indications a lovely man, is no friend to progressives. He will be a reliable Scalia-like vote for turning this country back.

This is why the Democrats needs to stand firm. This seat should have rightfully been filled by President Obama. And the Republicans broke all rules and norms of the Senate to deny Judge Garland a vote, a vote he would have easily won. So Democrats should feel free to talk with Judge Gorsuch. They could even let Republicans hold hearings. But they should only allow a nominee named Merrick Garland, or someone similarly at the center, to join the Court.

Previous Post: « Donald Trump Announces His Nominee for the U.S. Supreme Court: WATCH
Next Post: Drew Barrymore Goes On A ‘Diet,’ Gaga Hits the Field and More TV This Week »