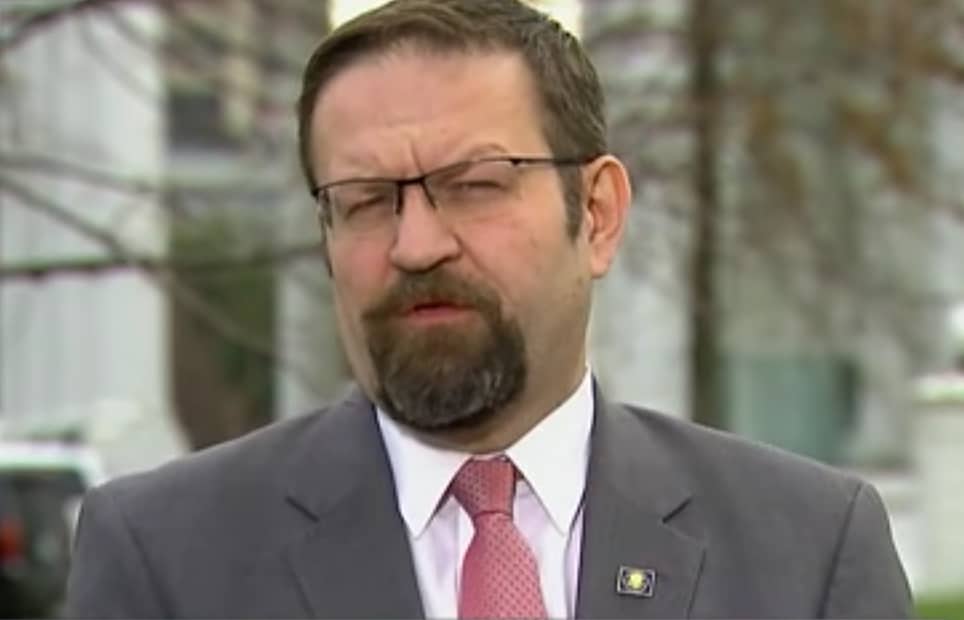 Bannon brought on Sebastian Gorka, a deputy assistant to the president and author of “Defeating Jihad: The Winnable War.”

“It may be shocking to some people out there to have a president who actually wishes to stand by his promises, and who, for a year, has been talking about making these kind of changes, and when he does that you’re surprised,” Gorka says. “Politicians keeping their promises may be unusual to you, but in this White House that’s how we like to operate.”

Bannon helped turn the conservative Breitbart into a platform for far-right ideas and white supremacists. At the outlet, he worked closely with Gorka, a former national security editor and a Fox News contributor.

Gorka says journalists have deliberately misrepresented Trump’s intentions, and that on occasion it provides comic relief at the White House.

“I come in every day and with my colleagues we have a good old laugh because we open the newspapers, the ones that are supposed to be the leading authorities in America, and they write about issues where we were in the room the day before, and their reportage has absolutely no resemblance to what is actually happening inside the White House,” he says.

Gorka says the White House is not in disarray and denies its officials are sending mixed signals on policies including Washington’s stance on Ukraine and Russia. But contradictions are apparent.

Last week, UN Ambassador Nikki Haley condemned and called for an immediate end to the Russian occupation of Crimea.

“Crimea is a part of Ukraine. Our Crimea-related sanctions will remain in place until Russia returns control over the peninsula to Ukraine,” Haley said.

But in mid-January, then President-elect Trump told The Times of London he’d offer to end sanctions imposed on Russia over the annexation of Crimea in return for a nuclear arms reduction deal.

“They have sanctions on Russia — let’s see if we can make some good deals with Russia,” Trump was quoted as saying by The Times. “For one thing, I think nuclear weapons should be way down and reduced very substantially, that’s part of it. But Russia’s hurting very badly right now because of sanctions, but I think something can happen that a lot of people are gonna benefit.”

“He’s not going to go into Ukraine, all right? You can mark it down and you can put it down, you can take it anywhere you want,” Trump said.

“I’m not interested in the chattering classes, in the social justice warriors,” Gorka says. “If you’re really going to ask really churlish and childish questions like that, then there really is no point to the interview.”