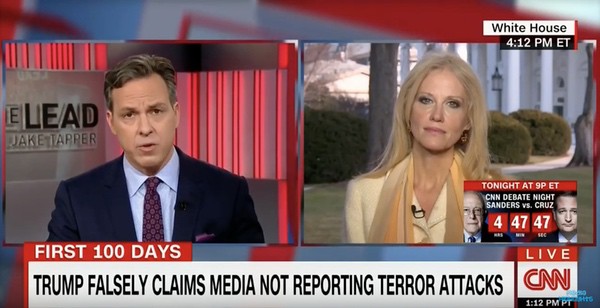 Jake Tapper had it out with Kellyanne Conway over Donald Trump’s bogus claims that the media doesn’t provide adequate coverage of terror attacks.

“He was saying the media does not cover these stories because we don’t want to cover them because we have some agenda. That’s what he was suggesting and it’s offensive given the fact that CNN and other media organizations have reporters in danger right now in war zones covering ISIS and I just don’t understand how the president can make an attack like that.”

When Conway tried to spin her way out of that situation, Tapper confronted her about Trump’s apparent lack of interest in terrorist attacks that are not caused by Muslims.

“While we’re on the subject of not addressing a terrorist attack, I want to ask you, in Quebec City last week, a white right wing terrorist opened fire on a mosque filled with men, women and children. Six people were killed. President Trump hasn’t tweeted one thing about this. Why hasn’t he offered sympathy to the neighbors in the north?”

“He is very sympathetic to any loss of life. It is completely senseless and it needs to stop regardless of who is lodging the attack. We, of course, are very sad about loss of life here. And he is talking about trying to stop terrorism and people who want to do harm to this country. I’m sure in the case of our neighbors to the north, I’m glad that the prime minister of Canada is coming here… next week. Excuse me. I’m sure they’ll talk about that if he’s coming soon, as I understand. The fact is he — I will ask him, he doesn’t tweet about everything.

“He doesn’t make a comment about everything, but I can tell you the entire point that I do think has been misinterpreted many places about why he wants extreme vetting in this case temporary and through seven very narrowly prescribed countries that the Obama administration, President Obama’s administration and Congress thought needed more, quote, ‘serious screening.’  He is doing that in response to what he sees and he hears in his briefings as the advance and continued threat of terrorist acts. Not unlike the one you are citing to our friends in the north. Put us on record as always being sad about this as a senseless loss of life. “

“He tweeted when there was an attack at the Louvre museum when nobody was killed. I don’t understand why he wouldn’t tweet when six Canadian citizens were murdered except for the fact that the under cover document that the White House distributed the other day — last night, rather, also did not mention any attacks other than those committed by Muslim terrorists –and obviously radical Islamic terrorism is a big problem, but there are all sorts of kinds of horrific terrorism that take place. We saw some of that in South Carolina recently, and I guess the question is are these victims any less dead than the ones killed by Islamic radical terrorists?”