You are here: Home / The Worst Part About Being Gay: WATCH 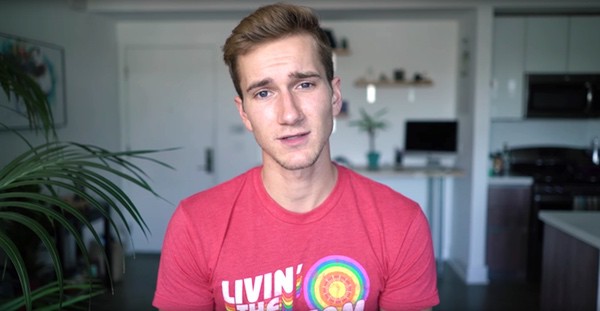 Vlogger Ethan Hethcote offers some thoughts about the scars that bullying leaves on young gay people, offering a powerful personal story that may resonate with a few of you.

Ethan’s remarks are a reaction to an article by Michael Hobbes published by Highline on HuffPost entitled Together Alone: The Epidemic of Gay Loneliness, a must-read which is about that, but also about the pressures gay men face once they are out of the closet and put into social circles where everyone is “primed to expect rejection.”

Even as our rights have advanced , Hobbes notes, “he rates of depression, loneliness and substance abuse in the gay community remain stuck in the same place they’ve been for decades.”

Gay people are now, depending on the study, between 2 and 10 times more likely than straight people to take their own lives. We’re twice as likely to have a major depressive episode. And just like the last epidemic we lived through, the trauma appears to be concentrated among men. In a survey of gay men who recently arrived in New York City, three-quarters suffered from anxiety or depression, abused drugs or alcohol or were having risky sex—or some combination of the three. Despite all the talk of our “chosen families,” gay men have fewer close friends than straight people or gay women. In a survey of care-providers at HIV clinics, one respondent told researchers: “It’s not a question of them not knowing how to save their lives. It’s a question of them knowing if their lives are worth saving.”

Ethan has some interesting and heartfelt thoughts about his own experience.