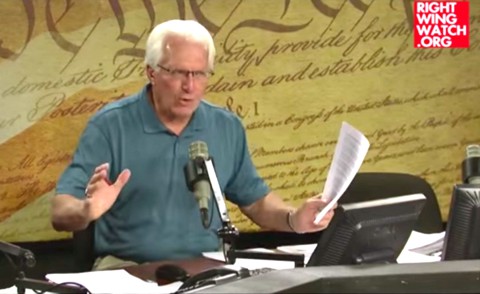 Dinosaur right-wing hack Bryan Fischer has become the oppressed victim of some epic Twitter trolling after he claimed that LGBT people “stole the rainbow from god” and should give it back.

Speaking on his American Family Radio programme Tuesday, Fischer – who in 2015 claimed he was born pigs**t ignorant – reiterated his widely mocked rainbow flag claim, calling it “the worst example of cultural appropriation in history is the LGBT community stealing the rainbow from God.”

Worst example of cultural appropriation ever: LGBTs stole the rainbow from God. It's his. He invented it. Gen. 9:11-17. Give it back.

Can u believe the nerve of this poptart cat appropriating a rainbow from the very hands of God in space? And then POOPING IT?? pic.twitter.com/s2GeDpj7YG

ok you can have it back but…sure you still want it? pic.twitter.com/0oFzcG6sac

Also suggesting that global warming is a hoax, he continued:

“The rainbow is God’s. God invented the rainbow – look at Genesis 9:11-17 – He invented it, it’s His thing, He put it in the sky as a promise that he would never again destroy the earth through a flood. Are you listening Al Gore? Al Gore, you do not need to worry about the planet being destroyed by floodwaters. Why? Because God has put His rainbow in the sky to let you and everybody else know, ‘I’m never going to do that again.’”

He concluded that the rainbow is god’s idea and “you need to give it back.”

Have a listen below via Right Wing Watch.